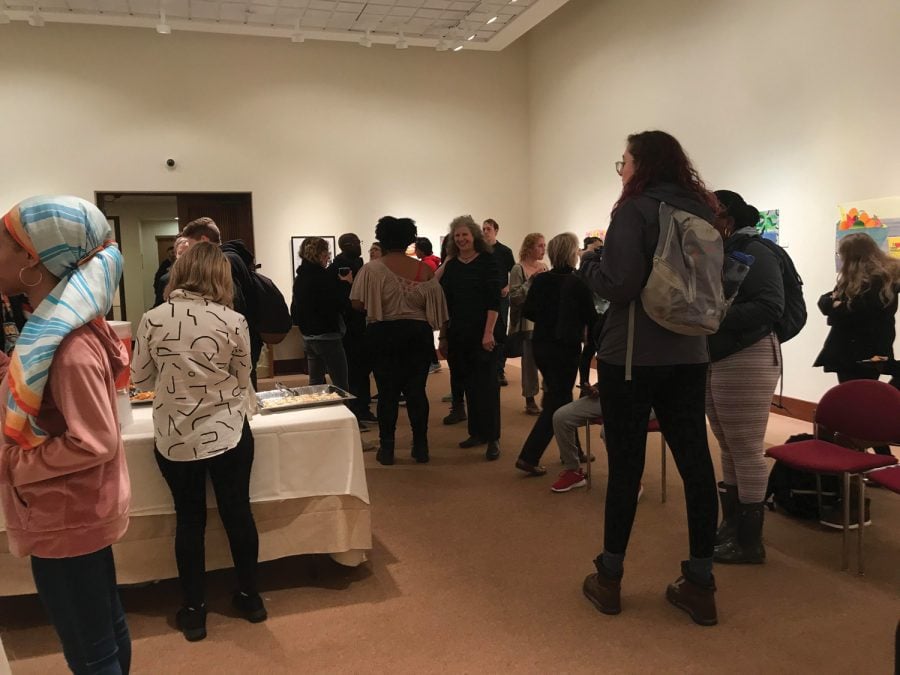 Students join Karen Lederer on her artist-led tour when she visited campus.//Photo by: Ethan Santana/The Guilfordian

Printmaker and painter Karen Lederer, whose artwork was on display in Hege Library from Jan. 11 to Mar. 1, visited Guilford to meet with students and offer insight into her printmaking process and artistic style from Thursday, Feb. 21 to Friday, Feb. 22. Known for her highly saturated and poetic work, Lederer creates a wide variety of prints by painting with watercolor and crayons that reference her New York upbringing as well as iconic artworks and modern-day brands.

“When I first saw Lederer’s art, and I didn’t know anything about her and her process, the first word that came to mind was ‘childish’,” said senior Jules Evans-Anfom. “The colors are so bright, and the lines aren’t that clean. But as I looked at the pieces more, and after I went to the demo this morning and saw her process, I realized it’s actually pretty intricate.

“So, people may think ‘Oh, this looks childish, it’s not art,’ but clearly it is. It’s actually really professional, and I think that’s kind of the point of it.”

To kick off her visit, Lederer, along with Printmaking Professor Katy Collier, hosted a Free Press event on Feb. 21 from 2:00 to 3:00 p.m. in the Hege Cox Printmaking Studio. Those in attendance were able to screen print one of Lederer’s designs that she made with her friends onto posters to take home.

On the second day of her trip, from 10:00 a.m. to 12:00 p.m., Lederer collaborated with art students from the mixed media and drawing classes and showed them her printmaking process up close. Students not only saw Lederer in action but also tried their hand at painting and making stencils, producing four unique and quirky prints by the end of the workshop.

“I think all people from different levels got something from the workshop,” Collier said. “It was really good for anyone that hasn’t seen printmaking before to just spark something.

“And for the printmaking and painting students, it’s really valuable to see other people that are doing print and how they are doing it. They got to see that ‘Oh, Katy’s not the only printmaker.’ It’s great because I don’t want to be the only representative of printmaking for them.”

Lederer employs a form of printmaking known as monoprinting in which she paints on a plastic sheet, known as a plate, and adds different painted stencils before sending it through a press to be printed. In this technique, Lederer can only make one print per plate, so each piece is special.

“We have done monotypes in class, but Karen works in a pretty unusual way, so I was really excited for her to come to see her process,” Collier said. “She works in a very individualistic and unique way, and I was excited to see some of the ways she builds up layers and only has to run her work through the press one time.”

Following the workshop, students from both classes reflected on Lederer’s style and were able to relate her printmaking to concepts they had learned previously in class.

“I’ve never seen that type of art before, so it was a new experience,” said sophomore Eder Flores. “It also incorporated a lot of things we’ve done in class like with the all the different types of lines and shapes. But the preparation of the stencils and the crayons and watercolors were used in a way that I didn’t know about, and it really impressed me.”

Evans-Anfom, who has had her own experience with printmaking, was inspired after seeing Lederer create prints.

“I think seeing (the process) actually does help,” Evans-Anfom said. “I’ve had ideas about what to do next, but I haven’t been sure how to execute it. (After) seeing this as a possibility, I’m more confident in some of the ideas I’ve had. Watching her demo was another learning opportunity, and I think that’s a lot of what art is.”

Later that day, from 4:00 to 6:00 in the Art Gallery of Hege Library, Art Gallery Curator and Director Terry Hammond hosted an artist-led tour for Lederer’s exhibition, “Table Top: Prints and Drawings.” During the tour, Lederer was able to explain the thought process behind her art and also answer any questions attendees had about her or her prints.

“This is a really exciting opportunity for me,” Lederer said as she introduced herself to the crowd. “While I make a lot of prints, I show my paintings in exhibits much more often, so my prints are almost more of a personal practice for me.

“I make them because I love making them, and they teach me a lot about different techniques and mark-making skills. But this is the first opportunity I’ve had to just show off both my prints and my paintings. It almost makes me a little emotional to see them both in one space.”

In her prints, Lederer not only alludes to relationships between artists, such as Picasso and Matisse, to introduce a historical perspective, but she also emphasizes the commercialization of prominent art pieces in the modern era.

“What does it mean that you can go into a gift store at a museum and buy a mug with a famous painting on it?” Lederer asked. “How does that change your relationship with that painting if you’re drinking your coffee out of it every morning? I don’t think it’s a bad thing; you get really close with that image if you’re always spending time with it in your home.

“But at the same time, it changes the image, and it makes it feel less important. It kind of loses its sense of aura, so often I am reproducing different images in my artwork to raise those questions.”

Overall, students have found Lederer’s art to be quite eye-catching and different from anything they have seen before.

“Her pieces have so many different symbols that could be interpreted in so many different ways,” said senior Jhanna Vasser. “Her style is kind of rebellious to what you typically would expect from an artist who’s in an exhibit.

“I’ve never really seen an exhibit of printmaking, so I don’t really know the limits of what is printmaking, but I love how colorful it is. There are a lot of solid colors like the black and white but at the same time there’s just so much color, and it’s just refreshing.”

Additionally, Lederer’s arresting artwork seems to have set a precedent for future exhibits, as students and faculty hope to include more experimental and diverse pieces from subsequent artists.

“(Future exhibits should) focus on different kinds of art and people who have different styles like Karen, so we don’t focus too much on any one kind of idea,” said Early College student Nina Palamaris. “There is just so much value in different types of art and they’re all inspirational in their own right.”

While Lederer’s exhibit is no longer on display at Guilford, her work can be found on her website.