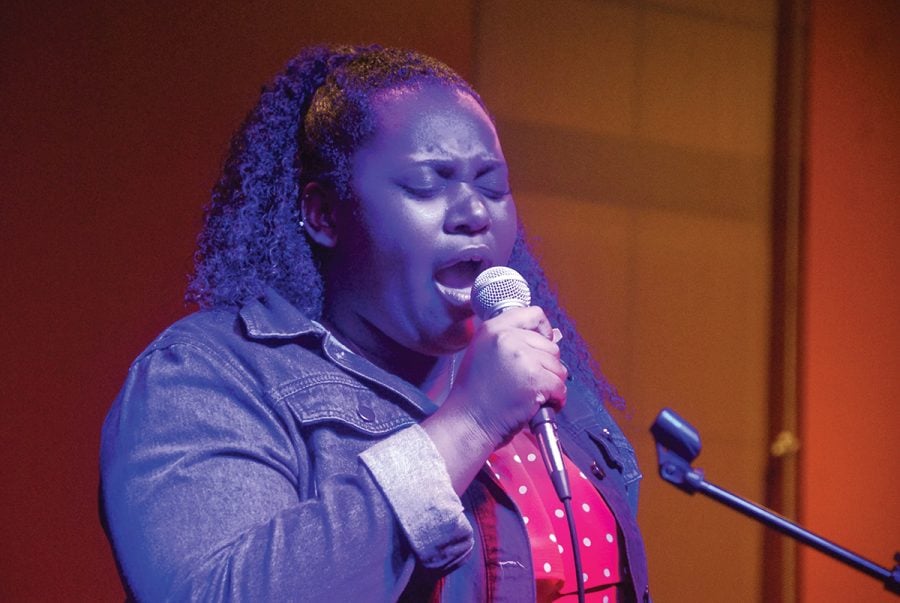 Junior Nia Dingle sings Beyonce’s “If I Were A Boy” during the Open Mic Night that took place on Friday, Oct. 5 in the community center. // Photo By: Ezra Weiss/The Guilfordian

In the lounge of the Community Center, dozens of students were gathered for the open-mic night performances on Friday, Oct. 5. Lights were dimmed at the event, titled “Speak Your Truth,” where community members witnessed around a dozen students rapping, singing, performing spoken word poetry and playing instruments.

The open-mic event was one of many events held as part of Guilford College’s first Social Justice Week, sponsored by the Office of Diversity, Equity and Inclusion and the Ethical Leadership Team.

“We wanted to have an event that incorporated student voices and that’s why we decided to kind of culminate Social Justice Week with open-mic night,” said Interim Associate Vice President for Diversity, Equity and Inclusion Krishauna Hines-Gaither.

“Normally about once a semester we have an event that we call ‘The Element,’”

Hines-Gaither said. “The Element is an open-mic night, very similar, so I structured this (event) based on The Element.”

Open-mic night was open to all students willing to participate and demonstrate their artistic talents.

“Artist, graphic artist, musicians, painters, poets, for centuries have been lifting their voices up to stand up and to stand with suppressed people,” Hines-Gaither said. “This (event) is just a representation of how that has been done throughout history.”

Speak Your Truth witnessed pieces that dealt with a range of social issues, including mental health, discrimination and sexual assault.

“We’re in a liberal arts environment,” sophomore Phillip Williams said. “People who usually come here are really into liberal arts ideals and just hearing these different points of views from these different peoples, even if they might not be on the same subjects, but a variety of subjects that affect us socially, that’s why this event is really cool.”

Winners were chosen by the total scoring of stage presence, crowd energy, creativity and overall performance.

Williams won third place for his performance of an original song, which he has yet to release. This event provided an opportunity for him to perform his song, which is currently untitled, for the first time to a public audience.

“I want to be in music production and music business,” Williams said. “I (perform) so I can get used to scenarios where all eyes are on me and people are listening to my stuff and judging it.”

By the end of the two-hour event, senior Olivia Winder was happy to have attended.

“I think it would cool to have more events like this,” Winder said. “It was a really good community building exercise where you got to know everyone’s talents.”