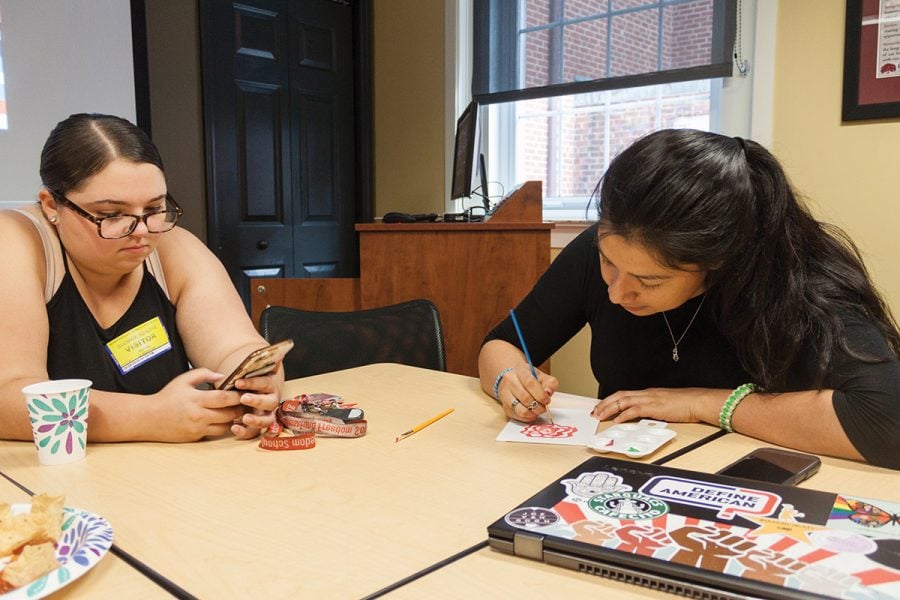 Junior Kendra Guzman and senior Jeniffer Gonzalez-Reyes paint canvases and have a conversation regarding culture on Wednesday, Sept. 26 in King Hall. // Photo By: Fernando Jiménez/The Guilfordian

In honor of Latinx Heritage Month, Dr. Krishauna Hines-Gaither held an informative presentation night on race relations and current conflicts between Haiti and the Dominican Republic. The presentations were held in the Gilmer Room on Sept. 19.

Covering the topics of Black identity, history between Haiti and the Dominican Republic and the current situation of Haitians living in the Dominican Republic, this night not only celebrated Latinx heritage, but also to empower students with the knowledge of what is happening on the divided island of Hispaniola.

However, that was only the beginning of the conflicts between the two nations. In the 1930s, dictator Rafael Trujillo ordered an ethnic cleansing of the Dominican Republic to make the country more white. Oct. 2 to Oct. 8 is remembered as the Parsley Massacre, a bloody execution of dark-skinned people who could not trill the r in the word “perejil,” meaning parsley. An estimated 15,000 Haitians and dark skinned Dominicans were killed.

More recently, the Dominican Republic has been implementing laws and policies to dehumanize and deport Haitians out of their country. Since the massive earthquake of 2010 hit Haiti, many Haitians moved to the Dominican Republic in search of a better quality of life. But after many long years, Haiti has yet to recover to its former state and is currently facing a Cholera epidemic.

To combat the effects of this immigration on the economy and public health of its citizens, the Dominican Republic has placed a new law that will strip many Dominican-Haitians of their rights. They have also begun forcibly transporting Haitians over the border of Haiti. Hines-Gaither showed the room a video questioning the motives of the Dominican government. She discussed the possibilities of the motive being race, economics or public health. Student Josey Dumas was asked by Hines-Gaither to speak about her past as a Haitian-American and her experiences.

“I want to stand up for Haitians,” Dumas said. “So they (students) can understand what it’s like to be Haitian and all the negativity we do go through.”

The presentation and discussion brought many people’s attention to the treatment of darker skinned people and of how minorities often struggle to unite even when they are being faced with a larger overall oppressor. Guilford College student Paula Hernandez reflected on the night and what it meant to her personally as a Mexican-American.

“As a minority, I don’t like to compare myself to other minorities because I feel like we’re all fighting in the same thing,” Hernandez said. “And that’s how we should all see it. We shouldn’t have to step on each other.”

Speaker Hines-Gaither added that while they wanted to celebrate Latinx heritage, they also wanted to expand on what that meant.

“We wanted to honor that month, but also not by doing just superficial things like food and clothes and dancing,” Hines-Gaither said. “We wanted to talk about issues that really matter.”