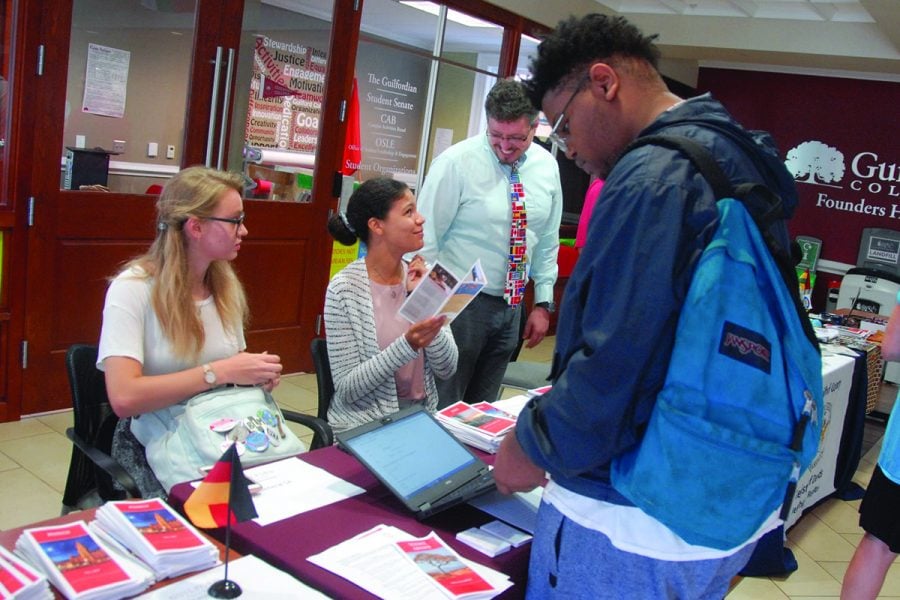 Flags from different countries decorated Founders Hall as part of the Study Abroad Fair and Passport Caravan event that took place on Wednesday, August 29 from 11 a.m. until 3 p.m.

The Study Abroad Fair aimed to showcase all the study abroad options that are available, not only to the new first-years but also to the campus community as a whole. Senior Amelia Wellman volunteered during the fair and spoke with students about the different programs being offered.

“Any student who is interested in studying abroad, this is their day to get as much information as they want. We have over 800 different programs where you can study abroad in over 75 different countries,” Wellman said. “Because we have such an extensive array of programs in so many different countries, it shows that even though we are a small campus we are still very globally engaged.”

“Guilford College was given a grant by the Center of Intercultural Exchange and Education and they gave us a grant to give out a hundred free passports to students on campus,” Van Pelt said. “If you are a US citizen and you’ve never owned a passport you may qualify to receive a free passport through the study abroad office.”

Any student that is interested in receiving a passport or participating in a study abroad program should visit the Study Abroad Office located in the back wing of the Carnegie Room, in the Hege Academic Commons.

Senior Daniel Bowen was part of the Brunnenburg program in Northern Italy studying environmental ethics and sustainable agriculture this past spring semester.

“One of the really nice things about studying abroad is the ability to travel in the surrounding region. I was able to go to the Canary Islands during Spring Break, it was beautiful,“ Bowen said. “I also got to go paragliding in the Italian Alps. It was definitely one of the main highlights of my trip.”

Bowen also advises first year students to visit the Study Abroad Office and tell Study Abroad Director Daniel Diaz what they are interested in so that they can be assisted in finding the program that is right for them.

Senior Charles Bookheimer attended the University of Alicante in Spain this past summer where he studied Spanish. According to Bookheimer, one of the highlights of his trip was immersing himself in Spanish culture while being warmly welcomed by his host family abroad.

“Living with a host family was awesome, they were there for me, showed me around the city, took me out to dinner and it was overall an incredible experience,” said Bookheimer. “Personally, I have a really busy schedule being a science major and found this summer study abroad program. I think a lot of students don’t consider the fact that they can spend the summer abroad.”

The Study Abroad Office is available to answer any questions students may have regarding studying abroad. Additionally, current Guilford College students can attest to the one-in-a-lifetime opportunity that is experiencing a different culture and becoming a global citizen.