Geeks on the Quad unites to celebrate pi day 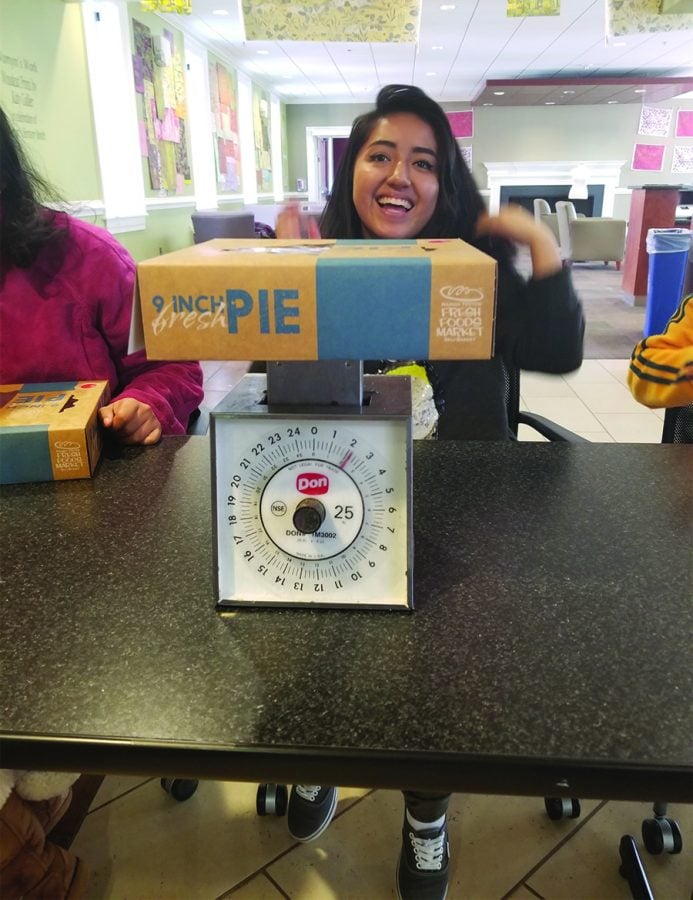 From trivia questions to pie-eating contests themed around Pi Day, Guilford College’s Geeks on the Quad event provided the community with an opportunity to share geeky passions while learning more about others.

The event was hosted by the Society of Physics Students, Guilford’s Community Senate, Investment Club and the Pre-Law Club on Wednesday, March 14 from 1 p.m. to 3 p.m. in Founders Hall.

The event featured booths set up by various Guilford organizations and the information they wanted to share with the community.

The Investment Club was one of many clubs that decided to put their knowledge and passions on display.

“We just started the Investment Club,” said sophomore Zach Evens, president of the club. “We haven’t had a meeting yet, but we’re planning on having our first meeting pretty soon. And we just want to teach people about the stock market and making money in the stock market.”

Geeks on the Quad allowed Guilford organizations, like the Investment Club, to reach out to the community and show students what they are about.

“I think both of them (the Investment Club and Geeks on the Quad) could have a great effect on the community because just gaining exposure to different clubs kind of allow people to explore various different clubs and organizations through Guilford, and become a bigger participant in the Guilford College community,” said Evens.

The Guilford Chapter of SPS serves as a supplement to the classroom, allowing students interested in physics to become more involved in the community while delving deeper into the subject.

Through this time of engagement and discussion, Geeks on the Quad aimed to embrace the diversity of interests of the community through promoting the idea of acceptance and representation, especially with the sciences and mathematics.

“Not to lead directly into the Guilford Edge, but that program is trying to open up Guilford’s campus to the idea that every student that comes here is a part of something,” said senior Sean Kirwan, President of the Society of Physics Students.

By focusing on this different side of Guilford, the event sought to challenge stigmas that are often associated with “geeky” areas of concentration and discussion.

“I think it promotes a community,” said Early College at Guilford student Juliana Touprong-Wang. “And it also works against the stigma of being geeky and things.”

Many involved hoped to communicate to the community a stronger message than that of just numbers, statistics and pie.

“What I’m most passionate about, at least as far as (the Society of Physics Students) is concerned, is public outreach,” said Kirwan. “Bridging the gap between the scientists, if you will, those who are interested in science and mathematics, and people who would say, ‘I don’t even want to hear about that, that’s so far above my level.’”

Kirwan is looking forward to collaborations between other Guilford organizations for similar events in the future.

“I hope that it can be done again in the future, and that there be more participation, a little bit better marketing,” said Kirwan. “And that it’ll help with this rebranding of ourselves as one college and one body of students.

“And it will help us show collectively, even though we are interested in very different, different things, we are, in fact, one people that can come together and make the core values of Guilford.”