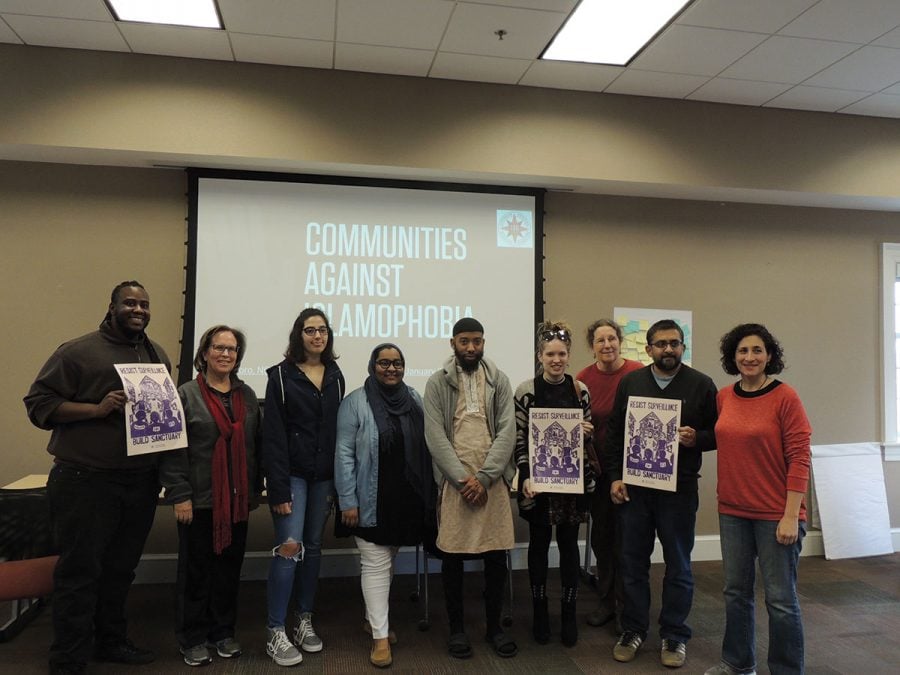 Attendees of the Communities Against Islamophobia event pose for a picture on Saturday, Jan. 27, 2018.//Photo by Abigail Abantohollans/The Guilfordian

A table filled with stickers, posters and pamphlets supporting sanctuary greeted attendees as they entered the Communities Against Islamophobia training session.

Communities Against Islamophobia was held by the American Friends Service Committee on Saturday, Jan. 27 in Founders Hall from 9:00 a.m. to 1:00 p.m. This interactive training session was sponsored by the Friends Center and provided individuals with the opportunity to learn about speaking out against Islamophobia. The session also addressed how to shift the anti-Muslim narrative in the media to a narrative that is supportive of the Muslim community.

“A goal of the training is to develop an analysis of anti-Muslimism and anti-Muslim narrative overall,” said Ayah Khalifa, the Communities Against Islamophobia NC intern. “And develop narrative shift skills and to rethink the concept of allyship. It’s not really an anti-bullying workshop, it’s not comprehensive … we’re really just scratching the surface, we could go a lot deeper.

“It’s not a guarantee that we will all become experts in challenging (Islamophobia). I’m still not an expert, I feel like your entire life, you are continuing (to find) different mechanisms and ways to go through it.”

Although Communities Against Islamophobia just touched the surface of facing Islamophobia, it allowed members of the Guilford and Greensboro communities to gain a sense of how they can notice and challenge the Islamophobia present around them.

“When I heard about the training, I immediately said, ‘I want to bring it to Guilford,’” said Interfaith Community Coordinator Asher Kolieboi. “I wanted it to come to Guilford because we’re a very diverse community, we have a pretty sizeable Muslim Student Association, Muslim faculty.”

This training session was one of several events held at Guilford this week that focused on learning more about Islam and current issues around Islamophobia, and how that fits into the conversation about community.

“These issues are particularly present here because of the large Muslim population in the state,” said Kolieboi. “Because (of) the diversity of the state, I thought it would be a great idea to have this on campus. So we can continue, because I wouldn’t say we can begin the works, I think it’s already going on so we can continue the work of interfaith dialogue, of being a sanctuary for everyone and being a safe, living, learning community.”

Attendees were able to practice what they were learning by taking part in various activities throughout the training, ranging from discussing possible responses to Islamophobic comments to looking at Islamophobia and profiling in the media today.

Some Muslim students, like sophomore Haya Mujali, a sociology and anthropology major, confront the scenarios practiced in the training on a more regular basis. Thus, Mujali was inspired to participate in the training to both learn individually and educate others in the group.

“I wanted to be more informed about how to respond to people’s allegations against Muslims,” said Mujali. “I am Muslim myself, and I have experienced where people have talked bad about my people, and I didn’t know how to respond to it because I didn’t have the proper script, necessarily.”

Communities Against Islamophobia gave attendees the chance to share and analyze the different ways that they have seen the presence of Islamophobia in today’s society.

“All of a sudden, with this wave, there is more of a want to be inclusive, which I guess is good,” said Khalifa. “But I wish we showed it not just in a sense that this woman is wearing a hijab, and that must mean she is Muslim.”

During large group discussions about the portrayal of Islam and Muslims in media coverage, film and television shows, the conversation of inclusion and diversity arose.

“I feel like there are different ways to portray Islam in (the) media, especially fictional media,” said Khalifa. “Without just saying ‘I’m gonna put a scarf on a woman and that means she’s Muslim, so now we have Muslims on our show and we are diverse.’”

By looking into the various types of individual and state-level acts of violence against Muslims, this training session provided participants insight on how to approach this issue with sensitivity and respect.

“A lot of times, people have perspectives or views, thoughts and feelings about things, but may not always have the information to back it up or have a deep understanding of the history or aware some of these, this anti-Muslim rhetoric came from.” said Lori Khamala, Director of the North Carolina Immigrant Rights Program for the American Friends Service Committee in Greensboro. “It’s good to understand, have a better understanding of that. And then also to try and get the tools to work to change the narrative in their own communities.”

Communities Against Islamophobia worked to help attendees be more informed and be more prepared for when they challenge Islamophobia. In one workshop, Khamala and Khalifa gave attendees a series of tips for how to analyze difficult situations as a bystander.

In addition to analytical skills, attendees were also given advice on how they can effectively intervene in order to help the target of a situation.

“Sometimes it just means getting them to focus on something else to make sure the individual getting targeted is safe.”

Understanding how to read the situation and react accordingly was one of the many topics Communities Against Islamophobia discussed. Attendees realized how complex some situations can be and how easily they can escalate if approached the wrong way.

“You can’t let your emotions control how you respond to people,” said Mujali. “You actually have to be level-headed and talk to people and try to make them understand the struggles that people go through.”

Through emphasizing the importance of creating sanctuary, Communities Against Islamophobia provided the community with a safe space for conversation about the discrimination, profiling and surveillance of the Muslim community.

“Islamophobia isn’t just racism or hateful acts of individuals,” said Khamala. “But that it can be built into institutions and into our government. Some of these stereotypes and beliefs that people have carry out into our policies and practices that are used to justify the oppression of Muslims and other communities of color, in local communities and also on an international level.”

The AFSC Greensboro branch and the Friends Center are looking forward to potential future collaborations in bringing important topics of discussion to Guilford.