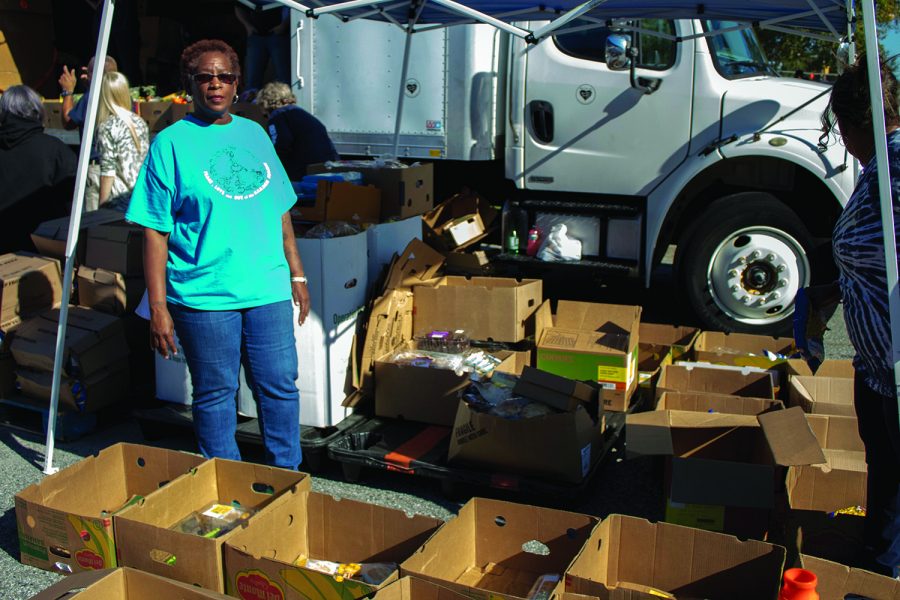 Diane Davis poses near the bread and desserts section of the Fresh Mobile Market.//Photo by Julia Martins de Sa/The Guilfordian

Guilford County, North Carolina has gone from being the most food insecure county in the nation to being the ninth, and organizations like the Out of the Garden project have helped make this jump possible.

Davis first heard about the opportunity to volunteer with the organization through an email asking people to help. She had just retired after 40 years of government work and had a lot of time on her hands. Davis felt it was better to volunteer than go back to work.

“When I first started with Out of the Garden, I didn’t realize (there were) so many hungry people in the state of North Carolina,” said Davis. “It was a way to give back.”

At each stop, volunteers unload a large truck full of donated food items from restaurants and grocery stores across the Greensboro and High Point area. Walmart, Food Lion, Panera Bread and Little Caesars Pizza are just a few of the donors that make food distribution at Out of the Garden possible. The government also provides food so that everyone who benefits from the organization can get what they need.

According to Davis, the amount of food given to each person is determined by how many people are in the line at each stop. Each person receives a 50-pound box of produce, meat, bread, desserts, pizza and beverages. Depending on how much food is donated, the boxes can contain more food.

“The boxes are enough to feed a family of four for one week,” Davis said.

The volunteers spend anywhere from one and a half to two and a half hours at each stop. The physical labor is demanding, but for Davis it’s worth it.

“I feel like I’m a blessed person,” Davis said. “Even in retirement, I’m still able to live the quality of life I had been living. And for a lot of these people, it doesn’t happen. Halfway through the month, they may run out of food. I’m never going to run out of food in my house, so for me, it makes me feel good to make sure that their (families) are covered at least for a week.”

In the two years Davis has been volunteering, she has seen general improvement, but not necessarily local improvement.

“I see a lot of the same people in line at all the same stops,” said Davis. “You hope that sometimes they won’t be in line, but they still are. They haven’t come up as well as they should.”

Amari Brown, a client of Out of the Garden, agrees.

“You guys are doing a great job doing what you’re doing,” said Brown after receiving his box of food.

Brown stood in line for over an hour waiting for his box, along with 60 to 70 other people.

The impact that Out of the Garden has, with its multiple programs for the children and families of Guilford County, is what keeps Davis volunteering for them. Davis plans to continue volunteering as long as she is able to in hopes that Guilford County continues to improve the lives of people like Brown who struggle with food insecurity.

“It’s one person at a time,” said Davis. “But at least we’re here to give them something.”