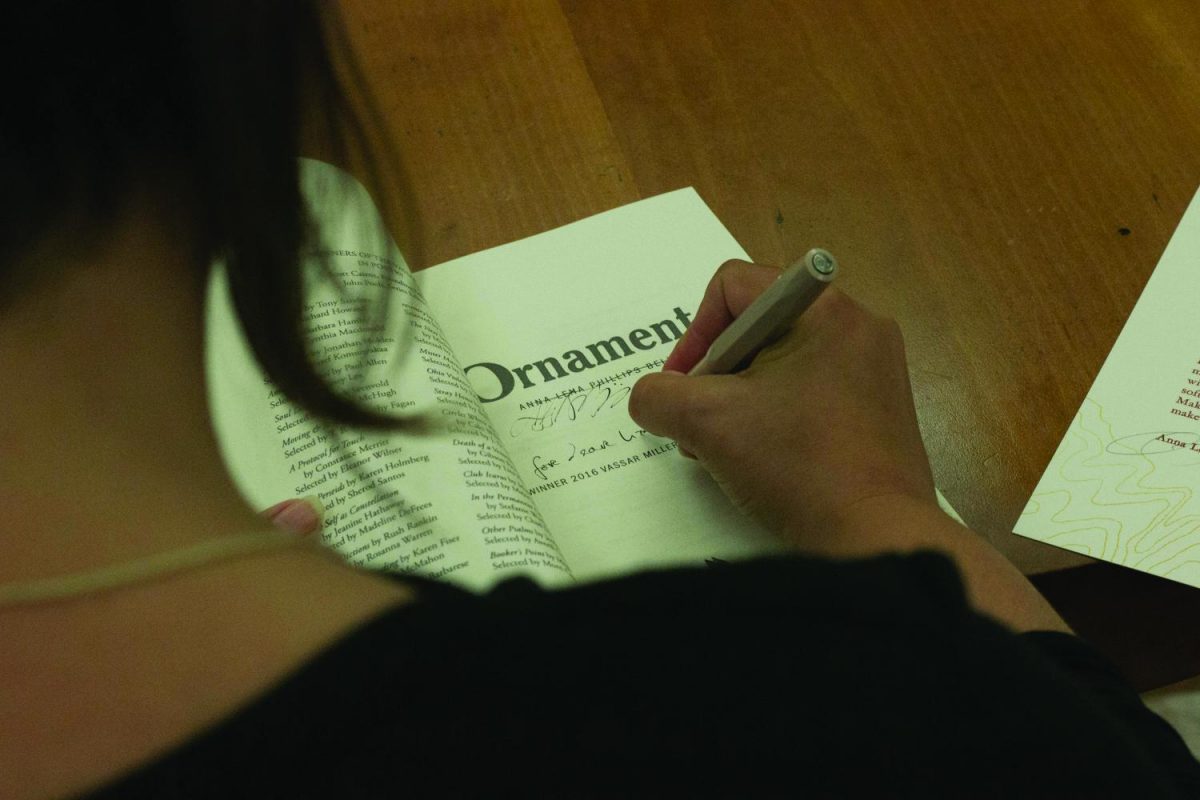 Anna Bell presented her book, “Ornament,” on Thursday, Sept. 28, 2017. Afterward, Bell signs and inscribes the books she sold.//Photo by Eric Xu /The Guilfordian

Since attending Guilford, Bell has been an editor at several publications, including the American Scientist magazine. She currently edits the publication Ecotone Magazine and teaches at the University of North Carolina at Wilmington, where the Ecotone Magazine was founded in 2005.

Bell’s first book of poems, “Ornament,” will only be published in the spring, but it already received the 2016 Vassar Miller Prize in Poetry, an annual award given by the University of North Texas Press. Bell’s reading from “Ornament” at Guilford gave the community a chance to understand the poetry in the book.

At the start of the event, Associate Professor of English Jim Hood introduced Bell. Bell was a student in Hood’s class during his early years teaching at Guilford. She also worked with Hood as a teacher’s assistant.

After the introduction, Bell began reading from her collection of poems. The poems ranged in theme from vines to locations important to her, such as the Piedmont area and the two states she felt attached to, North Carolina and South Carolina. Bell was able to use her various life experiences to compose the poems. She was also influenced by the professors she had at Guilford, including Carolyn Beard Whitlow, a former professor of English.

“I think a poet should use every strategy that is available to them and experiment as much as possible,” said Bell. “ … Looking at the world of formal verse opens up all kinds of possibilities in terms of what one can do with one’s craft.

“I was lucky to work with Carolyn (Beard) Whitlow while she was here and lucky to continue working with Jim Hood who is still here, who was open to that kind of experimentation and those kinds of strategies.”

The room silently listened. The only noises were the occasional laughter at a line of the poem and Bell herself speaking. Several students arrived in the middle of the reading, but otherwise the audience’s attention did not waver. Most of the poems were short, rarely extending past three minutes. After reciting each poem, Bell provided the poem’s background. She then spoke about poetry in present day.

“We’re in a great time for poetry,” said Bell. “There’s a lot of really good work being made, and there’s more access to learning to make that work for more kinds of poets than there probably ever has been.”

“She made eye contact. I always really appreciate eye contact,” said Haveliwala. “She was really respectful in how she answered the questions.”

Sophomore Momo Williams, an English and Music double major, found the question and answer portion to be informative.

“My favorite part was actually the questions,” said Williams. “I got to hear a little bit about her process and what kind of things she does when writing and that kind of stuff. It was just cool because I don’t know what I do (when it comes to my writing).”

Guilford College’s Department of English and Creative Writing, including Hood, organized the event.

“I was thinking it would be a really great opportunity to both give her some exposure, and for our students to see a (former) Guilford student who actually has a career in creative writing now,” said Hood. “I thought that would be really helpful for the program.”

Despite Hidden Figures author Margaret Lee Shetterly speaking the same night, an event that attracted many members of the Guilford community, Hood was pleased with the attendance for Bell’s reading.

“I think it was great,” said Hood. “I think it was a great turnout. The generosity of applause at the end (was great) and I just felt people were really receptive.”

The event ended at about 8 p.m. Bell stayed afterwards, signing books and speaking with students and other members of the audience.

“I was so happy to be coming back to Guilford and it was really fun to see both people I knew when I was here and new faces,” said Bell.

For aspiring poets, Bell had simple suggestions to be more involved in the moment, despite living in a society that has become increasingly reliant on technology.

“Close your laptop. Turn off your phone.”