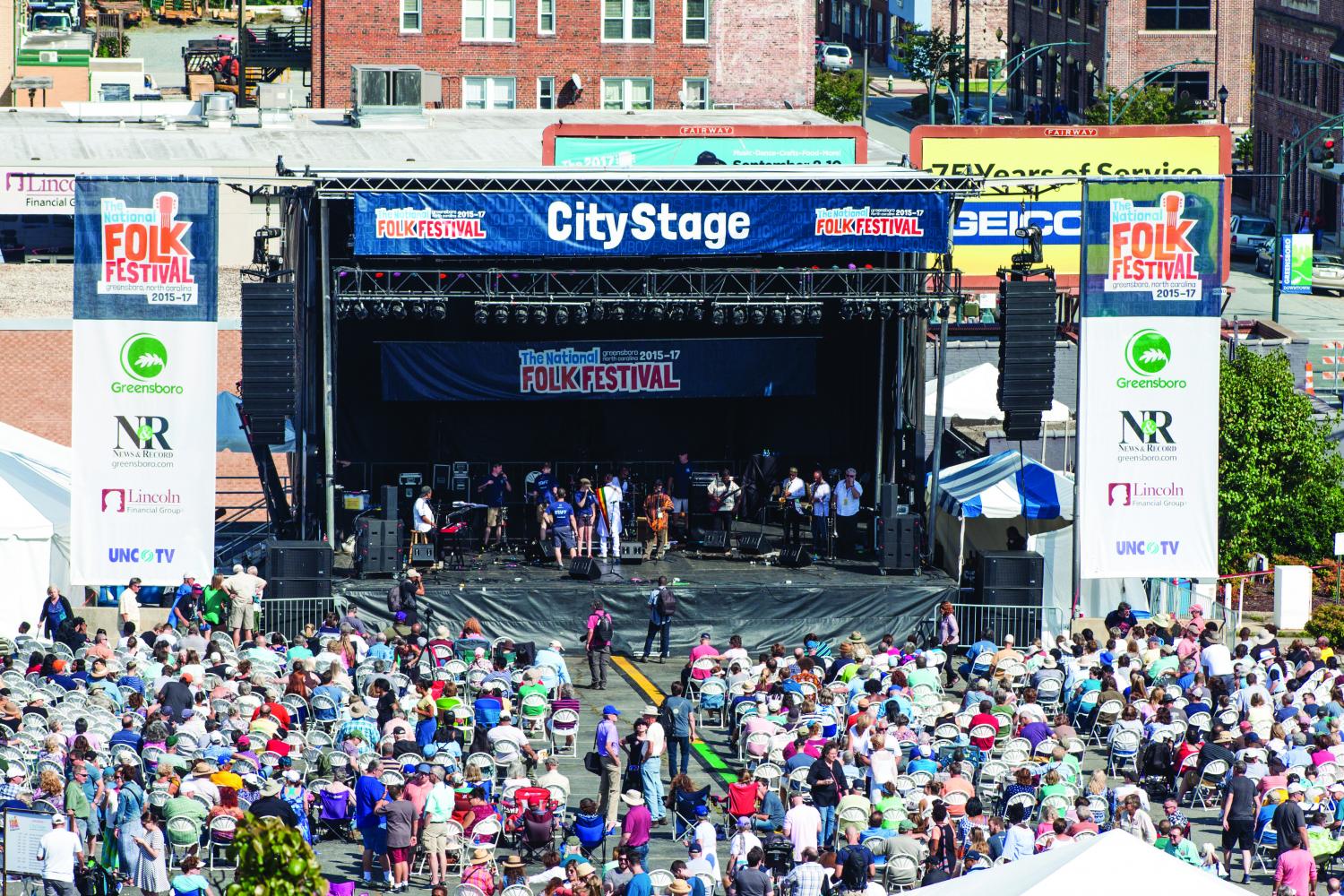 The National Folk Festival featured six different stages throughout downtown Greensboro featuring musical pieces, dance performances and folklife demonstrations. This is the last year the city of Greensboro will be hosting the free festival which took place from Friday, Sept. 8 to Sunday Sept. 10 2017.//Photo by Fernando Jimenez/The Guilfordian

After 77 years, the National Folk Festival has become one of the largest and longest-running celebrations of arts and culture. This year’s Festival was held in Greensboro, North Carolina from Friday, Sept. 8, to Sunday, Sept. 10. With over 50 performers and thousands of people attending, this celebration was one to remember.

The National Folk Festival showcased various cultures through the many food trucks and performers that were present at the event. Food with roots from all over the world, including the Mediterranean, Mexico, Korea and India, were available for individuals to explore.

Vendors set up at the North Carolina Arts Marketplace, a long strip of tents where vendors could showcase their art pieces to the public and engage in meaningful discussion about what the art signified. For many of those vendors, the Festival was a way to share their passion for art and expression through their pieces, ranging from ceramics and pottery to handmade soaps and carefully crafted guitars.

“I think that bookbinding and paper marbling are old arts that don’t have very many people knowing what’s involved in it anymore,” said founder of Anne’s Books and Papers, Anne Murray. “And so I wanted more people to know about these old crafts that used to be very revered.”

Murray first discovered her passion for these art forms after reading about them.

“About 11 years ago I saw a book in the public library called the Penland Book of Handmade Books and I saw it, I checked it out and I knew I wanted to be a book binder,” said Murray.  “So I started taking classes and teaching myself. Then I decided I wanted to do it professionally so I quit my day job and I do this full time now.”

In addition to having the opportunity to display their art, many vendors also participated in the Festival because they appreciated the sense of community and celebration that it created.

“I like the idea that the National Folk Festival is doing something bigger than just having a festival, and sharing various folk traditions” said Hannah Martin of Heartmoss Pottery. “It’s also teaching various communities how to do this, how to make it successful and I like being a part of that.”

Aside from the various food trucks and vendors at the Festival, there were also different performances for the public to view. Along with the Arts Marketplace, a total of seven stages filled the streets of downtown Greensboro as families, groups of friends and individuals came together to enjoy multicultural foods and performances.

For the entirety of the festival, distinctive music– from Tuvan Throat singing to Ethio jazz and even beat boxing– boomed through the streets. Many attendees, including Willie Austin and Laura Peck, expressed their excitement and admiration for the different music styles that were presented at the Festival.

Performers entertained large audiences that gathered throughout the Festival. Trick roping from atop a horse and various lively cultural dances kept everyone in awe. Breakdancing, clogging, Egyptian dances, Bharatanatyam (Indian classical dance), the salsa and traditional Sri Lankan dances captivated the audience and brought the Festival to life. The collaboration and spirit of the performers was reflected in the audience.

“When folks come together it can be fun” said Peck. “The music… it’s pretty spectacular.”

It was an enriching experience and exciting opportunity for the public to come together and celebrate different cultures and heritages, providing a joyous experience for people of all ages.

“They always have nice entertainment, something for everybody” said attendee Willie Austin. “Just being able to walk around and look is enough.”