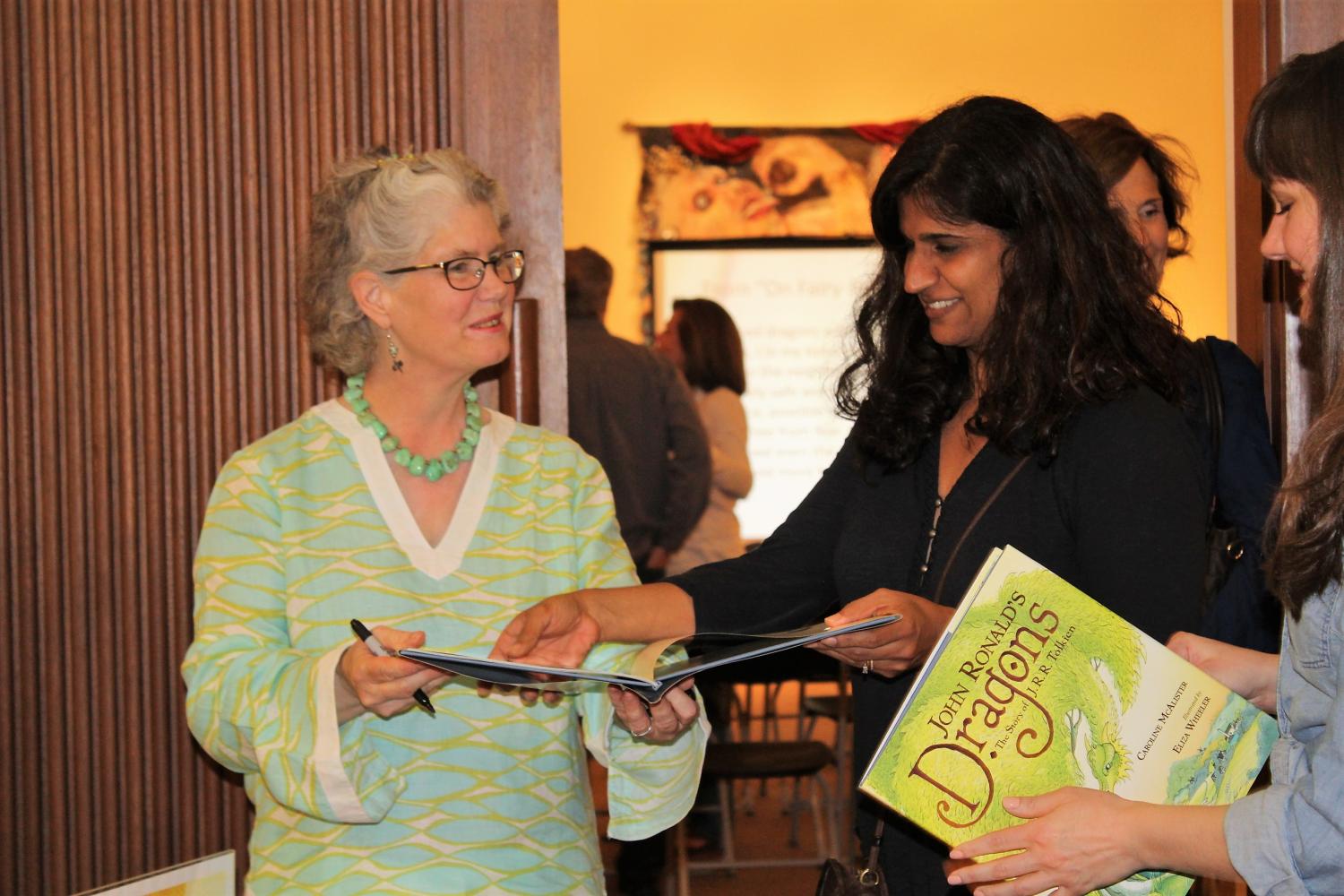 Not many people long for dragons.

But as a boy, John Ronald Tolkien “desired dragons with a profound desire,” according to his essay, “On Fairy Stories.”

On April 18, visiting professor of English, did a reading of her new picture book about this passion of Tolkien’s, “John Ronald’s Dragons”, in Hege Library.

Caroline McAlister’s book is a nonfiction biography that tells the story of J.R.R. Tolkien’s life through his search for dragons. Tolkien goes through his childhood, invents new languages, is orphaned, fights in World War I, and gets a job as a professor before finally finding his dragon — at the end of his own book, “The Hobbit.”

“If you’re going to write a nonfiction sort of biography for kids, what you don’t want it to be is just a Wikipedia entry,” said Caroline McAlister during the Q&A session after the reading.

The narrative of Tolkien’s search for dragons allowed her to tell a more compelling story.

“I am very proud of her,” said Judith McAlister, Caroline McAlister’s mother, who attended the reading. “She’s worked very hard at this.”

Caroline McAlister’s own love of reading started young. Her first encounter with Tolkien was when her father read her “The Hobbit” when she was about eight.

“One year, when she was in the seventh grade, we spent a full year in Spain, so (Caroline and her siblings) didn’t even go to school,” said Judith McAlister. “So we read every night to them, … (and) we didn’t stop reading when we got back.”

This book is not Caroline McAlister’s first experience writing children’s books. She has previously written two others, “Holy Molé!” and “Brave Donatella and the Jasmine Thief.”

“My first attempts at writing books for children, I thought it would be really easy, because I thought I was really smart, and I had my PhD,” said Caroline McAlister. “And none of that helped very much, … I had to write a lot of bad stuff before I could write good stuff.”

Writing the book on Tolkien was a journey in and of itself though. Caroline McAlister finished the manuscript in the spring after the first J-term trip she lead to Oxford, but after it was accepted by the publisher, it took three or four years before it was finished.

“They got that really good illustrator, Eliza Wheeler,” said Caroline McAlister. “So because she’s really good, she’s busy, so we had to wait for her to finish up some other projects.”

The book was finally released on March 21, and McAlister is doing a series of readings at local bookstores to promote it, including the one at Guilford.

“Caroline and I had worked together for many, many years,” said Doug Smith, a professional tutor in the Learning Commons, who organized the reading. “This was a good opportunity to celebrate her.”

McAlister is also going to be presenting at The Carolinas’ chapter of the Society of Children’s Book Writers and Illustrators on how to find an angle to write nonfiction for children. She is currently working on two middle-grade historical fiction novels about Elizabethan England, at least one of which she hopes to finish this summer.