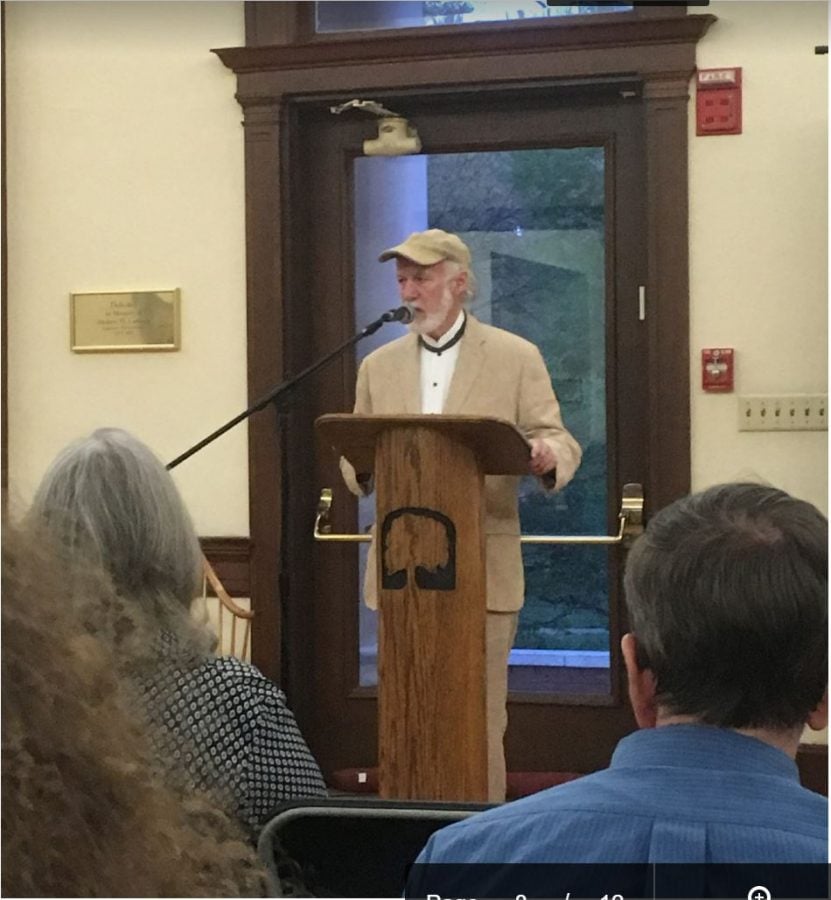 Allan Gurganus, author, reads an excerpt from one of his upcoming books to the student body on Wednesday, April 12 in the Carnegie Room in Hege Cox Library, in Greensboro, North Carolina.

“He held nothing back,” said Mylène Dressler, associate professor of English and creative writing. “And it was generous and fun, and real.”

“During his reading, it became clear to me … that he believes non-human animals deserve the writer’s compassion too,” said Dressler. “And that it’s the job of the artist to look at all of it, and not look away.”

A silent audience, trying to hold their breath as to not disturb the speaker, listened to the sound, paying careful attention to the slow, low voice that echoed across the Carnegie Room in the Hege Library. At times, Gurganus raised the volume to articulate quotes in the way the characters would.

“Most of the time, his voice was calm, but parts had emotion,” said Early College student Junn Park. “He completely emphasized the way it should be read in your mind. The way he describes the environment of the backwoods of North Carolina – it wasn’t too overloading, but it was sensory enough for me to picture it.”

At the end of his presentation, Gurganus answered questions from the audience. One member asked about his writing process.

“I write my first draft in longhand,” said Gurganus.

He would then go through a rigorous editing process which included editing the draft, typing the draft on the computer, printing it and editing it once more.

“It’s always valuable to me when we bring artists to campus, and they share not only their work but how they make and do their work, and how we might do and make our own,” said Dressler. “But what I loved about the way Allan shared with students and our community was that he was trying with every fiber of his being to give us a lifetime’s worth of knowledge about writing in a single hour.”

Listeners were especially impressed with how masterfully Gurganus crafted his work and the way he could explain how he did it.

“I particularly liked how he spoke about the baby elephant through the eyes of the townspeople: not as an elephant, but as a beast or animal,” said Early College student Janakee Chavda. “It was interesting how vividly I could imagine things with the combination of imagery, dialogue, and spoken language.”

In the end, Gurganus’ visit was welcomed by all as a refreshing, educational and captivating take on not only writing, but storytelling.

“I think the thing I enjoyed most about Allan’s presentation was being able to listen to his story,” said sophomore Gillian Sherman. “It is so rare these days to be able to slow down and actually listen to a story being read by someone.

“I love being transported to a different world through listening. His words were captivating, and his story felt like a slice of magic. I definitely feel as though Allan’s visit brought something joyful to campus after the tough few weeks that Guilford has had. His creativity brought light to our campus and inspiration for us as students to strive for.”