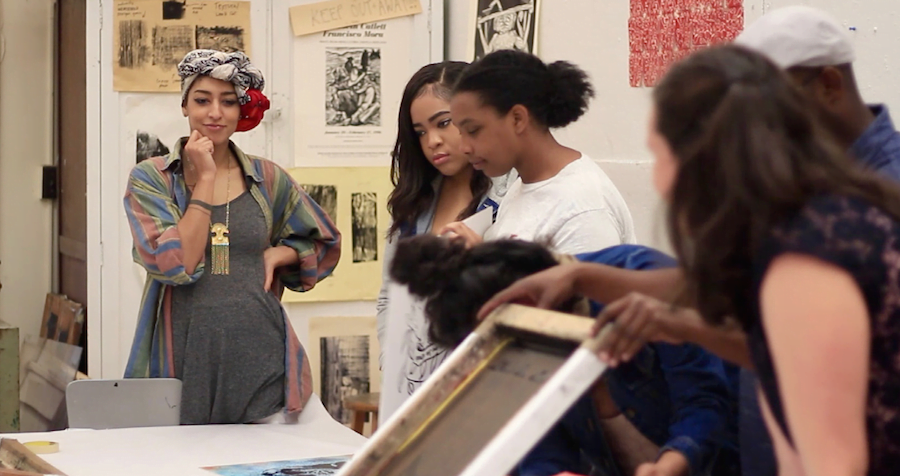 Saba Taj creates political posters along with students during an event open to the public on Wednesday, April 5 at the Hege-Cox Printmaking Studio in Greensboro, North Carolina. // Photo courtesy of Erin Kye

“What’s most notable to me is it’s one of the few times that I’ve depicted the villain, the thing that is being struggled against, in a body,” said artist Saba Taj. “The figure is stealing milk, in this violent way, from the breast of a woman of color and is backwashing that milk back into the mouths of the creatures that are swimming through the evil eyes.”

Taj describes her piece “evil eyes blind with blue,” a part of her exhibit titled “We have adorned everything on earth” in Hege Library. In “evil eyes blind with blue,” Taj used the villain and evil eyes to depict the colonization of South Asian people. Similarly, the rest of her work challenges problems such as Islamophobia and sexism and also focuses on her identity as a queer Muslim femme artist.

An artist talk with Taj was held on Tuesday, April 4 as the second part of the “Art and Identity Discussion Series” organized by Antoine Williams, assistant professor of art, which brings artists from underrepresented or marginalized communities to speak about their work.

“My focus is really often on these femme monsters … who are the ones who inherit the Earth,” said Taj. “They are simultaneously terrifying and funny.”

Taj became interested in exploring identity and societal problems in her art as a result of her experiences at a young age.

“I wasn’t growing up going to galleries and museums so much as I was watching television, using the internet and reading magazines,” said Taj. “I looked to these resources to try to find myself inside them. As you can imagine, there are some serious limitations to what’s out there, and in many ways I internalized those messages for many years.

“More recently, I’ve returned to those magazines and I cut them to pieces and make things out of them,” said Taj.

In her pieces, Taj used several different mediums including acrylic and spray paints, fabric, thread and glitter. However, what catches the eye about the hybrid figures is the collage used to create them with images from magazines such as Vogue.

The fragments were used to form hybrid figures that represented identities that do not necessarily fit into categories assigned by society.

“There’s interspecies combinations,” said Taj. “And throughout, it’s really talking about this in between space, this liminal space.”

Although her work was meant to challenge societal problems, particularly for Muslim people, it was not meant to offer solutions to them or to imply that these problems are only in the Muslim culture.

“My work is really speaking about the context that I know and understand most deeply,” said Taj. “So while I have experienced marginalization in my different ways, it is not my place to … be talking about how to save Muslim women.

“There are issues of misogyny and patriarchy within Islam absolutely, but it’s not limited to that. It’s not just a Muslim problem, and when we frame it that way it becomes incredibly problematic.”

Nonetheless, students who attended the talk were inspired by the art and its political undertones.

“Honestly, it’s really awesome and affirming,” said senior Colin Nollet. “As someone who draws a lot of my own art from personal, political spaces, it’s really cool to see people who are doing this work semi-professionally in ways that I could never do and in voices that I will never have.”

The relevance of the issues represented in Saba’s work was in part why her exhibit was brought to Guilford.

“I think this exhibit in particular is really one that is very openly about difficult issues related to Islamophobia, and I’ve never done a show like that,” said Terry Hammond, founding director and curator of the Guilford College Art Gallery. “Just the current climate that we’re in makes it very timely and important.”

Other attendees were also captivated by the diverse methods and ideas behind Taj’s art.

“I was interested in how she makes her work and how it all came together as a piece,” said first-year Annie Lattimore. “Especially her idea of the grotesque feminine monsters. I thought it was amazing to hear her say it that way because when you first look at it, you’re just like, ‘what is going on?’