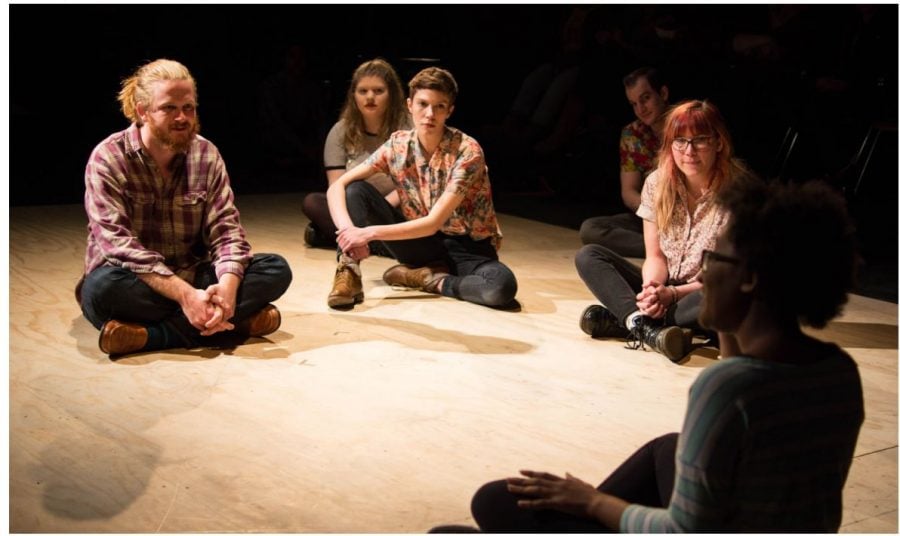 Cast members from the student-led play “Vital Signs” perform one of the 35 monologues from the play on Saturday, March 11, 2017 in the Sternberger Auditorium. Organized by the Revelers Club, students also had the opportunity to work with studio lights and other theater technology. // Photo by Fernando Jimenez/Guilfordian.

The lights are low as student-actors fill the stage in Sternberger Auditorium.

Three of the actors take seats in the middle of the room while everyone else sits around the edge of the stage. “Vital Signs” is about to begin.

“Vital Signs,” performed on March 10 and 11, is a series of monologues by Jane Martin, a pseudonym for a group of people. The show was put on by The Reveler’s Club, an acting club for students, which was restarted last year.

“I restarted Revelers Club last year to provide acting opportunities for students but also to provide design opportunities for myself,” said senior Riva Fairhall, who did the lights for “Vital Signs.” “The hope is to teach others so that next year, when I’m gone, more students can take over.

“We actually don’t have light design classes here, so the Reveler’s Club has been awesome because I wouldn’t have the opportunity to do it otherwise.”

This year, senior Emily Haaksma used the club as an opportunity to direct “Vital Signs.”

“Revelers Club is the reason for the show,” said Haaksma. “Reveler’s was actually around in the ‘80s, when my mom went to school here. (Students) were feeling a need for a student-run acting outlet, so they revamped it.”

The club gives students a chance to get into acting or theater tech who may not otherwise be able to do so at Guilford.

“I really loved acting again,” said first-year and actress Raina Baier. “I acted all through high school, all my life really, and I’m really happy to get back to it in college.”

In “Vital Signs,” each actor has one to three monologues for a total of 35 monologues.

“My first one is called Encyclopedia Salesman,” said junior and actor Lesly Vasquez. “It’s about a woman really into encyclopedia salesmen.

“The second one I didn’t really understand at first, but it’s about a woman who gets cheated on by her husband and goes on a honeymoon and describes a fire and gets saved by Spiderman and ends up pregnant with Spiderman.”

Actors like sophomore Billie Dunn-McMartin had trouble initially relating to their characters but had a fun time telling their stories. In Dunn-McMartin’s case, one of her characters was a woman demanding her sexual partner has a milk bleach bath before sex.

“She’s someone I can’t necessarily relate to, but someone like her is out there and we’re able to see a little bit of that person’s experience,” said Dunn-McMartin.

Each monologue is a few minutes and are about everything from a roller coaster ride to a soldier shooting an iguana.

“They’re told from these characters, and we only know so much about them from what they’re talking about,” said CCE student and actress Jilly Campbell. “They’re individual. They’re stagnant and don’t have anything to do with each other. There are overarching themes, but this has been both a very collective and individual thing.”

For the most part, those involved agree that the monologues do have some things in common.

“A lot of Martin’s work centers around what it means to be a woman and interact with a world that is particularly difficult for women or femmes,” said Haaksma. “I don’t want to say too much because the meaning is totally up to people in the audience and the actors.”

Audiences left the show feeling excited about their experiences.

“It was very different from the productions that I’ve seen prior, and it was really interesting for me,” said Community Director and First Year Experience Assistant Coordinator Amy Costa. “I think the coolest part about it was the emotional reaction that they were able to get from a single two or three-minute monologue.”

The centering of students was also a highlight for Community Director and Student Success Mentor Jason Hill.

“Anything student-led that students can kind of branch out and create themselves is always important, and it shows their creativity,” said Hill.

Those who participated in the production are excited for future opportunities.

“Based off of this experience, I would totally consider doing something again,” said junior and stage manager Juliana Avery. “Sometimes theater can be an intense space to be in, and I was really grateful to be with the cast.

For Haaksma, it is exciting to have had an opportunity to direct her own show.

“I don’t think that this show or last spring’s show would be possible without Mark Williams, who was a theater professor here,” said Haaksma. “He had a directing class for us and … he really gave us the opportunity to have our own autonomy when it comes to theater in this school.”