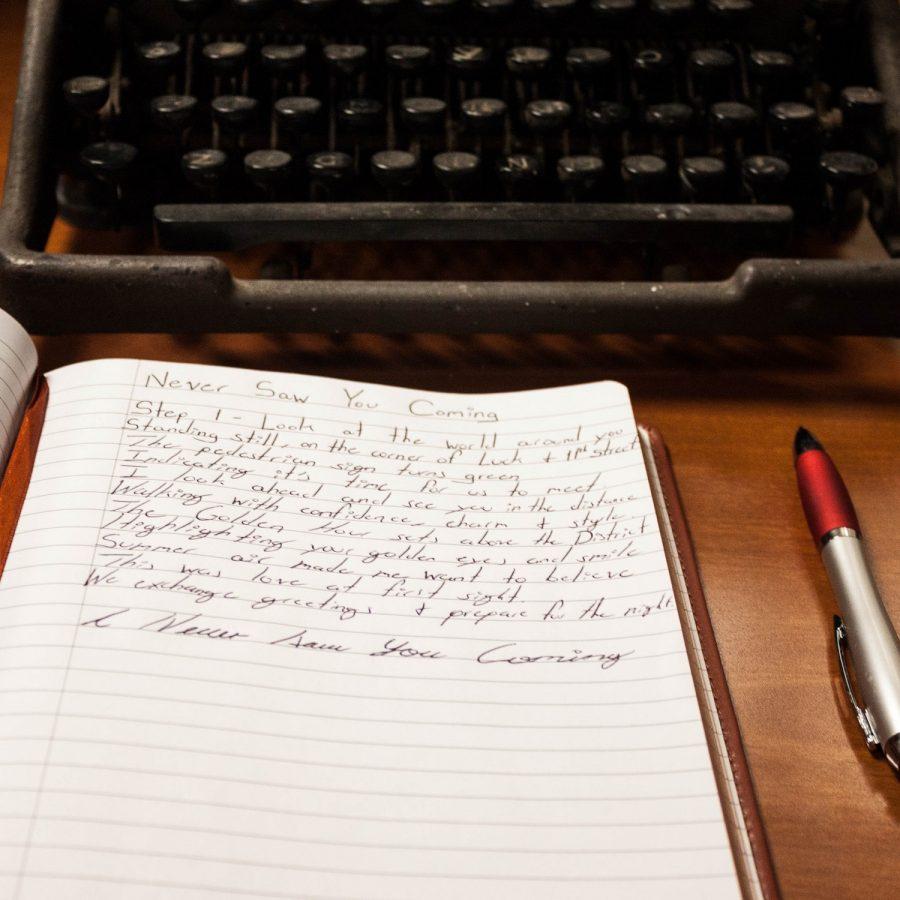 Over 26 original poems were featured during the Poetry Slam.

Audience members were encouraged to snap instead of clap at the second poetry slam hosted by Guilford College’s Greenleaf Coffee co-op on Friday, Nov. 18 in Milner Hall.

“For poetry slams, just do snaps,” said junior and Events Clerk for the Greenleaf Emma Ross. “You can do snaps even while people are reading poems.” Ross oversaw organizing this year’s poetry slam.

The slam featured 13 different poets, all Guilford students, who created and shared original spoken-word poems in two rounds of competition with a third round for four finalists. Subject matter ranged from struggles with racism and homophobia to love poems to encounters with campus geese.

“My poems are very personal,” said senior and art major Colin Nollet. Nollet coordinated, ran and judged for the Greenleaf’s first poetry slam during the spring 2016 semester. This year, Nollet was one of the performers at the slam.

“I think it ran really well,” said Nollet, on the subject of the first poetry slam. “So far, I think this is also going to be really awesome.”

According to Ross, this year’s event had both a larger audience turnout and number of poets than last year’s.

Some of this year’s poets performed in last year’s event as well. Jonah Woodstock, a junior and creative writing major, took part in the Greenleaf’s first poetry slam.

“I write kind of funky stuff,” said Woodstock. “(It’s) just my kind of event that can bring out creativity.”

“I definitely think that they have different styles,” said Nollet, discussing the differences between spoken- and written-word poetry.

“When spoken-word became a thing, it was really open and you could say so much more.”

“Like there’s jazz, which has rules, and then free jazz chucks the rulebook out the window,” said senior and sociology major Daniel Nelson-Rembellas, who performed at the poetry slam. “So you can try anything.”

Nelson-Rembellas made it into the final round of the competition, competing against fellow students Sojourner Davidson, Fernando Jimenez and Nellie Vinograd. A flurry of snaps followed the last poem of each of the finalists.

“I was glad that I was involved with an activity outside of the classroom that gets everybody of their comfort zones and to express themselves,” said Nelson-Rembellas.

The event was organized to promote creativity and expression.

The judges of the event selected Nellie Vinograd, a senior and double major in sociology and anthropology and English, as the winner of the competition, using the volume of the audience’s snaps and a set of judging criteria to make their decision.

“(Poetry) has been my outlet since I was really young,” said Vinograd. “I was so blown away by everyone who performed, and the fact that I even got into the final round was surprising to me.”

Ross and others who were involved in the event feel confident that it will be successful next semester.

“People should come to it in the spring,” said Ross. “Keep an eye out for it. It’s going to be really fun. We’ll have new judges; we’ll have new performers and we’ll have a good time.”