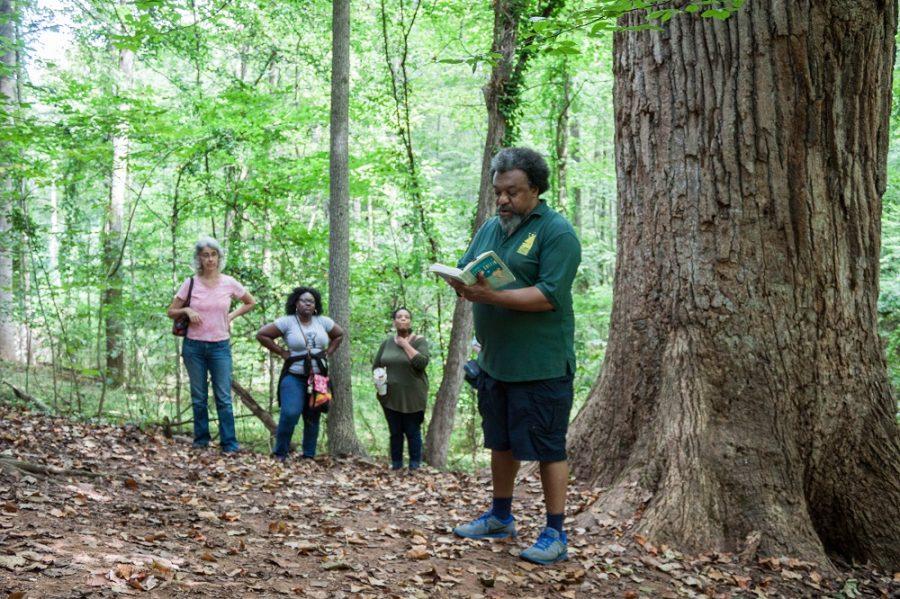 Hundreds of years ago, enslaved Africans and their descendants made their way to freedom by way of the Underground Railroad, a network of safe houses throughout the country that lead to Canada and states that did not condone slavery.

“(There was) a little brick school house which was built, and it was where European American Quaker children would attend school,” said Friends Historical Collection Librarian and College Archivist Gwen Erickson while leading the tour. “This is prior to the established New Garden boarding school, but it also would’ve been for younger children.

“But it also was used for a separate school in the same location. We have documentation that Levi Coffin taught African Americans in the local area, including slaves owned by David Caldwell. So that’s another piece that we have actually been able to verify.”

One of these pieces is a 300-year-old tulip poplar tree dubbed as the Underground Railroad Tree.

“At the time, it was probably 100 years old. Still, a pretty big tree,” said Director of the Bonner Center for Community Service & Learning James Shields, another tour guide. “Still a pretty old tree. We bring people here because we believe this tree is a witness to what we know happened based on journals of various friends.

“Based on those journals, we know underground railroad activity goes back as far as the late 1700s. We know that this area, New Garden, is what we call the southernmost terminus of the Underground Railroad. That’s not to say that Underground Railroad work didn’t happen south of this area, but in terms of organization, this is where it happened.”

Because of the Quaker principals of nonviolence and integrity, Quakers were the first predominantly white religious group to denounce slavery.

The tour was split into two groups. One group went to the Quaker cemetery across the street, where Erickson spoke about the Quakers who were instrumental in anti-slavery efforts, like Levi Coffin and Harriet Peck.

“The image that was used for marketing this particular tour, the ‘Remember the Slave’ image, was actually an artifact we have in the Friends Historical Collection from Harriet Peck, who was a Quaker from Rhode Island who lived here from 1837 to 1839 to teach at the initial founding year of what is now Guilford College.

“In her first year here, she was quite candid in her letters back home about what she was up to … She actually mentions to her dad what she did over the weekend, and one of the things she did was she taught local slaves how to read, which was highly illegal.”

“When (Levi Coffin) moved to Cincinnati, he ran a free goods shop,” said Shields. “These are goods that are not made by slave hands, so of course they are going to be a lot more expensive, just like now. If you want to find chocolate and coffee that’s fair trade, you’re probably going to have to pay a little more for it.

“That’s a real thing today, which is why this story is so important today.”

Shields really emphasized that, if nothing else, he wants people to understand how relevant our history still is and always will be.

Just like Guilford Quakers do today, the Quakers in the 1700s exemplified equality, honesty and integrity.

“We like to bring our students down here a lot,” said Shields. “Yes, we want them to know the history, but we also want them to think about in 2016, especially now, with all the craziness going on right now, what do you stand for? And what are you willing to do for what you stand for?”

For more information about the Underground Railroad at Guilford College and New Garden Friends School, contact Shields at jshields@guilford.edu and Erickson at gerickso@guilford.edu, or visit the Friends Historical Collection on the first floor of Hege Library.