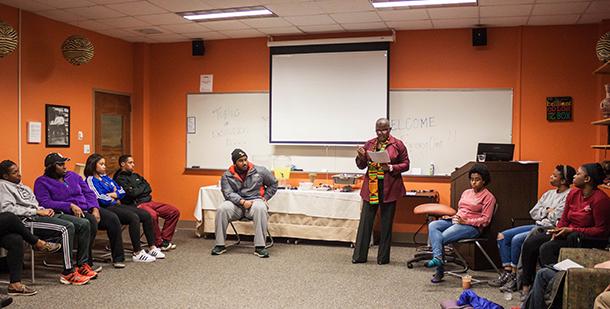 Barbara Lawrence facilitates a conversation on colorism and the implications of using the “N” word during a BUS kickback.

The “N” word. Out of the thousands of words that start with the letter N, we all know exactly which one this euphemism refers too. But why does this word have such a powerful meaning, and where did it come from?

Last week, Blacks Unifying Society hosted a kickback. The event featured discussion of the topics of colorism and the answers to these very questions moderated by Barbara Lawrence, associate dean for academic administration and student academic affairs and associate professor of justice and policy studies.

“Events like the BUS kickbacks we host are important because they allow those who are not educated on these topics to get some information about them,” said Jamie McCreary, sophomore and BUS secretary.

“I was ecstatic to see not just those of color in the room. It made me feel as if there are others out there, that are not just of color, who are interested in these topics.”

The first half of the evening was spent discussing colorism, or discrimination based on the color, or shade, of one’s skin. Specifically, attendees discussed what it means, its history and how it has personally affected, or been experienced, by those in attendance.

“You could just look around and see how people were so eager to learn,” said Kalah Dumas, sophomore and BUS treasurer. “It honestly made BUS executives happy to see the turnout, to see how people were engaged and also how Barbara made the discussion great, even when the topic got kind of rough.”

The discussion on the origin of the “N” word, however, took a very drastic change of tone.

“How should n—- be defined?” asked Lawrence, starting the discussion. The entire room was shocked. Lawrence continued, “These are the questions that are going to guide our discussion. Is this a part of the American racial cultural inheritance that warrants preservation? Why does n—- generate such powerful reactions? These are questions to think about.”

Then, to demonstrate how tone affects how the word is perceived, Lawrence began shouting the word. At first, she said it loudly and full of anger and then happily, as if spoken to a friend.

“Hearing her say that brought tears to my eyes,” said Dumas. “It made me think of slavery and (how) rough things possibly were. It made me realize how good we have things today, but we still need more change.”

Lawrence later went on to describe the history of the word and its usage, highlighting how it was always intended to harm and demean. Later, the discussion focused on its modern usage and whether or not this meaning can ever be changed.

At times, the discussion got very heavy. Looking around, you could see some students crying, others appearing uncomfortable, but nearly everyone was engaged in the discussion.

“It’s imperative for us to have these dialogues and to bring people together,” said Lawrence to The Guilfordian.

Overall, the entire evening was a very welcoming and social environment with a focus on community and education on hard-hitting topics. Most importantly, there was an underlying emphasis on engaging in, and advocating for, these issues.

“You must be very clear that your education is teaching and reminding you that you have to go out into the world and advocate for something or somebody,” said Lawrence during the discussion. “You have to. That’s it. If you don’t get anything else out of this, know that that is your assignment in life.”