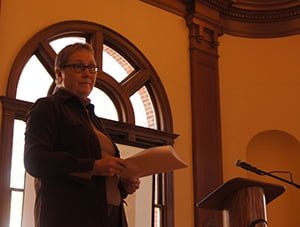 “(Schuyler) was afraid that any mass movement that disrupted the order of society would actually bring more damage than advancements,” said Marzioli. “For him there was not a separate African-American culture.”

According to Marzioli, the book “Black Empire” was actually published first as a series in a newspaper.

Ahearn presented on local students at Bennett College who participated in a movie theater boycott. Ahearn began learning about the 1937–38 boycott here in Greensboro years ago.

“I did a master’s thesis on the civil rights progression in Greensboro and then when I decided to go for my Ph.D. I thought back on this and I thought ‘I really want to read a lot more of that literature and figure out what that event really meant,’” said Ahearn.

This fact about Greensboro was not widely known and helped pave the way for other civil rights events in Greensboro such as the Woolworth sit-ins.

“I thought that this was kind of an obscure incident in Greensboro history that might broaden peoples mind a little bit about the whole timeframe of this movement,” said Ahearn.

When Ahearn first started studying her topic, she relied on the firsthand accounts of the boycott from citizens who were living during that time.

“I found out about it in the 1990s, and I wrote it up for the (News & Record)” said Ahearn a former Greensboro journalist. “Some of the participants were still alive at that time, so I did long recorded interviews with them.”

The event was cosponsored by the Faculty Development Committee and the Multicultural Education Department. There were not a lot of people in attendance; however, there was much discussion between the people who did attend and the presenters.

When asked about the awareness of Black History Month on Guilford’s campus, Marzioli said, “I think that’s something that can be improved.”

However, the Multicultural Education Department has been working tirelessly to celebrate Black History Month.

As we continue to celebrate Black History Month, we should think about the sacrifices that everyday people made to earn equal rights.  These presentations could motivate us to bring about change in our communities and the world.