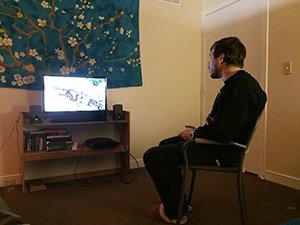 This is it. The whole game comes down to this. Your friends crowd around the TV. Your character races across the screen as you practically crush the controller in anticipation. A roar rips through the crowd as you clench victory.

This is community gaming.

In dorms, commons and student unions across the country, video and board games bring people together through friendly competition.

Gaming has found its spot at Guilford College as well. Across our campus, on TVs, laptops, portables and tabletops, almost everyone plays games.

“A majority of the people I know here play video games with their friends from time to time,” said first-year Alex Ward. “There are even more serious gamers in the Yachting Club.”

Community games strike a chord with almost any player, serious or casual, because they seek first to include.

“(Multiplayer and tabletop games) are always a group activity,” said Yachting Club Commodore and senior Patrick Withrow in an email interview. “The idea is to have as many people having a good time as possible.”

These games attract gamers with laughs and grins and keep them interested with experiences you cannot have anywhere else.

“I like gaming because it’s a unique medium,” said Yachting Club Secretary and senior James Trout in an email interview. “You can’t get the experience of a game from books, TV or movies no matter how much you try.”

Working through problems of fantastic proportions can fill an afternoon, but community gaming does more than offer fun one off experiences. Huddling around a table or a screen forges bonds stronger than the armor of the games’ many mythical heroes.

“When you are interacting and cooperating with someone else, you naturally get to know them better,” said Withrow. “It is impossible to spend four hours in a room with someone and not know them a little better by the time you leave.”

Despite potential good times, those on the outside of the culture feel intimidated by it. Though at times gaming may seem daunting, it is far from impossible. Above all else, new gamers should remember winning means almost nothing.

With that in mind, grab a few friends and jump in.

“If you keep losing and get mad over (the game), you’re just going to ruin everyone’s time,” said Ward. “Usually though, gaming is a good way to learn to work together or just laugh together and at each other. It allows everyone to relax and be silly.”

Once the fun starts, find a game you like and stick with it. There is such a variety of choices out there that everyone can find something.

“My favorite games are games like ‘Super Smash Bros,’ ‘Mario Party’ or ‘Mario Cart,’” said Trout. “Nintendo (the developer of the above games) does a lot of fun and easy-to-play, low stress competitive party games.”

Community gaming has been part of college life almost as long as there have been colleges. Whether they do it with cards, elaborate role playing games or the next Halo, games of all kinds bring together people of all kinds, not just nerds.

In the accurate words of Withrow, “Nothing builds stronger friendships than slaying dragons together.”