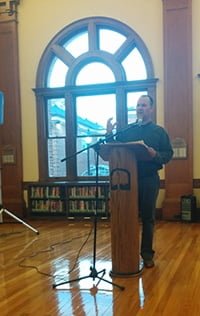 English professor. Father of two children. And now, once again, an author.

While this is his first full collection of poetry to hit the bookshelves, this is not Arnold’s first time being published. He has also published a chapbook, or a small booklet of poetry, titled “A Million Distant Glittering Catastrophes,” which won the 2010 Pavement Saw Chapbook Contest. In addition, his poetry can be found in many prestigious literary magazines including Best New Poets 2012, Verse Daily, Crazyhorse and Denver Quarterly.

“It’s always exciting for a writer (like Arnold) to see the work live and breathe in book form and to receive the recognition that an award and publication means,” said Assistant Professor of English Mylène Dressler in an email interview.

For Arnold, this recognition is well deserved.

“Some books of poetry dazzle us with their language and imagery, some with their music or tone and others with formal or structural dexterity,” said Stuart Dischell, Arnold’s former professor of English at both UNCG and New Mexico State University. “‘Earthquake Owner’s Manual’ has all of these qualities but something more, too. It is also an enjoyable book to read.”

Though considered a renowned poet by many, Arnold did not share his poems when he first began writing.

“I started writing poetry in high school in a journal but refused to share any of it until college,” said Arnold. “Since it was an extension of my journal, I didn’t see much value in sharing it with anyone. Plus, I was embarrassed to do so.”

As he continued writing, his writing style changed.

His purpose of writing has also evolved.

“These days, I think of writing as a way to reach out to others, as an act of sharing, as a tool for emphasizing what we have in common as humans,” said Arnold.

According to many, he has done this well.

“Martin has a real eye for what makes us human and what makes being human difficult and rewarding,” said English professor Andrew Salters.

His poetry is easy to read, but there is a hidden, deeper meaning within his simple language.

“There were a lot of really accessible images that had to do with modern American life, while still being abstract enough to be poetic and thought-provoking,” said Emily Lampkin, a sophomore at UNCG.

Before becoming a father of two children, Arnold wrote twice a day.

“I find my brain is better at exploring possibilities in the morning and better at making tough revision decisions in the evening,” said Arnold. “These days, I write when I can throughout the day. Ideally, I’ll get back on to a standardized daily schedule in the near future.”

“Part of the pleasure of drafting is exploring different paths the poem can take, so my desk is littered with versions and versions of ideas,” said Arnold. “If I like where it’s headed, I push the poem as far as I can.”

The drafting process was similar to his process in naming his book.

“This book has evolved over the past six years with quite a few titles,” said Arnold. “I think of book titles as lenses to highlight patterns in the text.

“This title is about attitude. It combines two elements that don’t seem like they can be bound together: how to take care of the earthquake you purchased. In plenty of my work, I try to combine elements that seem disjunctive, to make some sort of harmony from the discord.”

Though the process may be tedious, his hard work has paid off.

After publishing “Earthquake Owner’s Manual,” Arnold is working two new projects. One is a chapbook called “City of Ideas.”

“In addition to ‘City of Ideas,’ I’ve recently been exploring a new project that is generally about landscapes,” said Arnold. “I’m not quite sure where this is headed or if when I get somewhere the project will even be about landscapes. That’s part of the fun and why I keep writing.”