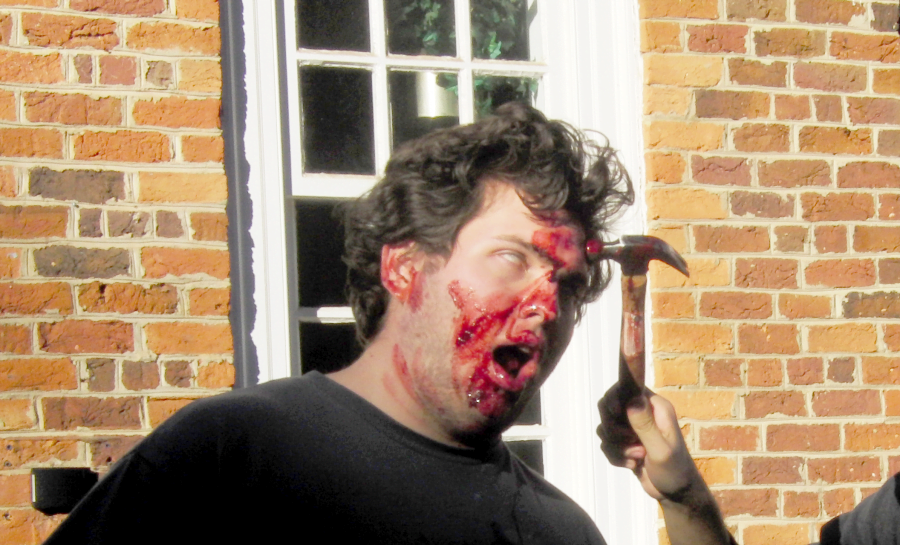 Guilford students fought back against the zombie menace on Nov. 5 (Courtesy of Don Smith)

Halloween may have been two weeks ago, but the zombies were not ready to cease their fun. On Nov. 5, they invaded Guilford with movies, games and a chance to “walk” in their shoes.

ZomBcon was presented by Associate Professor of English Heather Hayton’s English 400 senior seminar, “The Quick and the Undead.” The GuilCo Gamers sponsored the event. The 16 seniors came up with the idea to bring what they learned in class and share it with the Guilford community. The day kicked off with the original Romero movie, “The Night of the Living Dead,” followed by “Fido” and “Zombieland,” and ended with “28 Days Later.”

“ZomBCon is a festival of all things zombie,” said Hayton. “It happens all over the country … (but) we are just kind of starting here in Greensboro and at Guilford College.”

This is the first year that Hayton is teaching the seminar, which she came up with last year during her sabbatical.

“I love to think about zombies and talk about zombies,” said Hayton. “But I’m such a scaredy-cat when it comes to watching horror movies that I have an intellectual fascination with zombies and not a practical one.”

Her students in the seminar have explored questions such as what the significance of a zombie is and why they are such a popular monster in media. As each film was shown throughout the day, the audience saw how zombies have progressed with time to adapt to the different cultural fears that develop.

“In class, we discussed the many different types of zombies,” said senior seminar student Gerina Auguste. “There (are) the old zombies that walk really slow and (are) decaying, whereas the new zombies are fast. We call them ‘Zombies 2.0.'”

The last three movies were introduced by students who are currently taking the seminar, although the first movie was introduced by Visiting Assistant Professor of Philosophy Joseph Cole. He talked about the social context of the film and when, if ever, it is okay to kill.

Along with the movies, the GuilCo Gamers provided all-day videogames. The chosen videogames were “Left 4 Dead 2” and “House of the Dead 2 & 3.”

“Many people enjoyed them and tried the games,” said senior seminar student and Vice President of GuilCo Gamers Johnathan Crass in an email interview. “‘Left 4 Dead 2′ is a great game to play with friends; it is all about the cooperative experience. ‘House of the Dead’ plays like the arcade shooting gallery games — just point and shoot.”

Later in the day on the Founders patio, around 40 people gathered to participate in the zombie walk. Seniors in the seminar and other students covered themselves in fake blood and made signs that showed whether they were against the zombies or there to support them.

“Zombies represent abject freedom,” said senior zombie supporter Brian Jones. “They can do whatever they want, including kill people and eat brains. That’s not something you can do as a normal, everyday citizen.”

Even though it was late in the day and the temperature was beginning to drop, everyone in their zombie make-up began to take their slow walk around campus and through Hege Library. Although not many people were outside, one passerby watched quizzically as they passed her on the way to the Binford parking lot.

After the walk, most of the zombie walkers headed back to the Bryan Jr. Auditorium to end ZomBcon with “28 Days Later.”

Although Guilford did not take the route that UNCG did, with an entire week of Humans vs. Zombies, the small ZomBcon event was just the right size for a college like Guilford. Although people did not question why the zombie is so significant in cultures worldwide, having fun with the actual zombie culture sheds a little more light onto this classic movie monster.

“Zombies present an uncanny element that most people can relate to because they are so much like humans and yet so different,” said Crass. “People also seem to enjoy the terror of zombies.”

Overall, ZomBcon was a chance for students to have fun, get scared and learn a little.

“I think there are lots of opportunities to learn something about yourself while you’re having a lot of fun and playing with fake blood,” said Hayton.