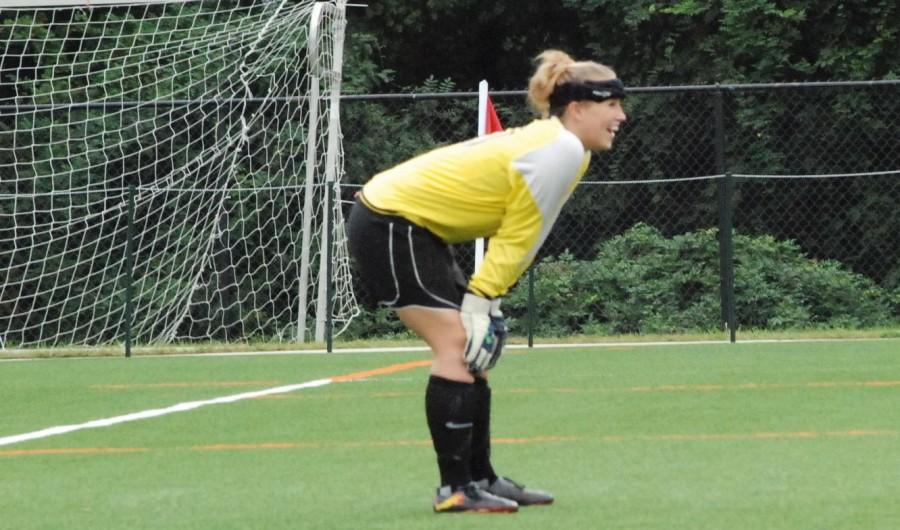 As the soccer season ends at the Old Dominion Athletic Conference (ODAC) Tournament, the Guilford College women’s soccer team had much to be proud of for what they have accomplished this season. The team has compiled a total of 10 wins, eight losses, and two draws, their best season since 2006.

Four girls in particular, Rachel Harman, Amy Baker, Katie Oliver and Jaclyn Nucci,  have contributed to the team’s success. They each attended Anne Arundel Community College in Maryland and have used their skills and familiarity with each other as an advantage in games.

“We had a really good program at Anne Arundel,” said senior defensive player Rachel Harman. “It’s really intense and I think a lot of people underestimate community colleges for sports, but it really prepared us a lot.”

Many players that have graduated from Guilford previously attended and played for AACC before transferring in their junior year. In an email interview, Anne Arundel soccer coach Jim Griffiths explains just how many girls have gone on to Guilford.

“I believe that counting this year’s players, 8 athletes have made the jump from AACC to Guilford since 2007.”

“There’s been a long relationship between the coaches at Anne Arundel and myself,” said Head Coach Eric Lewis.

Before accepting the coaching position at Guilford, Lewis worked at Lewisburg College in Raleigh as head soccer coach. During his time at Lewisburg, the relationship with AACC began.

“We started playing Anne Arundel during his (Griffiths) first year in Maryland,” said Lewis.  “We used to go there a lot, and we just stayed in contact.”

Lewis’ experience as a junior college coach gave him an understanding about how to choose players who have decided to transfer after their time at community college.

“You have to be careful whenever you get a large number of transfers and know what kind of kids you’re getting,” Lewis said.

Three of the four Quaker players are seniors this year and entered Guilford together.

“I’ve known Amy Baker since were like 10 or 11 and I played against Katie (Oliver) and Jaclyn (Nucci) in high school, but I didn’t get to know them until Guilford,” said Harman.

Equipped with the knowledge of each player’s approach, it has given them a sense of confidence and comfort for when they are on the field.

“I trusted Amy as my goalie more and I trusted Rachel because she played defense more,” said Oliver. “And I know the way Jackie plays so I knew she was going to be a key player in the middle and it made me feel more comfortable about playing my position.”

Not only is the trust within the girls themselves but their experience playing at Anne Arundel prepared them for the transition from junior college athletics to a Division III collegiate school.

“The coach at AACC is really tough. He is like a Division II, Division I coach, like really tough on you and wants you to do your best. I feel like I came in really prepared,” said senior goalkeeper Amy Baker.

“Community college is definitely a step up from high school so you get that level of experience,” said Nucci. “And coming in as a junior has you a lot more prepared; you know what to expect.”