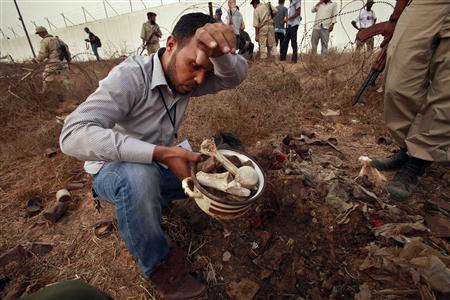 On Sept. 25, Libyan officials announced the discovery of a mass grave site that is believed to hold the remains of 1,270 victims near Abu Salim prison. The victims are rumored to be inmates that were executed in a massacre carried out in June of 1996 by Muammar Gaddafi’s security forces, the BBC reports.

“There’s no rule of law in a dictatorship,” said Visiting Assistant Professor of Political Science Robert Duncan. “Dictators will do anything to stay in power, and they’ll kill anybody who gets in their way.”

According to The National, the mass grave is the first physical evidence of a massacre that has haunted Libya and ignited the revolt that brought down Gaddafi’s regime.

The killings in the prison became a focal point for the opposition movement in Libya. Gaddafi, who was in power until just recently when he was expelled by rebel forces, was known for using brutality against anyone who did not favor him. The victims are believed to be political prisoners who had spoken out against Gaddafi and were consequentially disposed of by prison guards 15 years ago.

When the rebels swept through the country’s capital, Tripoli, in late August, Gaddafi was forced into hiding.

Libya is now represented by the National Transitional Council. The council consists of 31 members from 31 different cities in all different directions. According to its official website, it is the council’s hope to “liberate cities still under Gaddafi’s regime and then guide Libya to free elections and establishing a constitution.”

According to the BBC, the NTC discovered the grave site when they questioned security guards who were working at the prison and were present during the massacre. Bone fragments and clothing were found in the top soil but Libyan officials have to wait for international forensic help due to a lack of sophisticated equipment.

Family members of the victims have visited the grave site and have displayed a wide spectrum of emotions. Many of them suffered through years of silence and unanswered questions, but a flicker of hope remained to assuage fears of their loved ones not returning home. Sami Assad was told his brothers died five years ago of natural causes. Now he knows the truth.

“We are really happy this revolution has succeeded,” Assad told BBC News. “But when I stand here, I remember my brothers and many friends have been killed just because they did not like Muammar Gaddafi.”

Similarly, Nadia Trabelsi, who lost her husband in the killings, couldn’t understand why her husband was taken away.

“He was a good man and he did nothing wrong.” she told The National.

The findings of the grave hold symbolic importance for Libyans seeking justice after decades of repression and crimes under the regime.

“The cruelty people commit against their species is unfathomable,” said Duncan. “Power, for some people, is so important they will do anything to get it — even if that means doing all these horrible things to people — and they don’t care.”

Gaddafi’s power is slowly decreasing as the rebels move forward to establishing their own form of justice. However, there have been many casualties due to one man’s hunger for power and oppression, and the violence is likely to continue. Dictators do not like to have their power threatened, and Gaddafi is no different.

“It’s standard operating procedures for tyrants,” said Duncan. “With people who want to eliminate any opposition, they just round up those opposing them and kill them. They just never existed.”