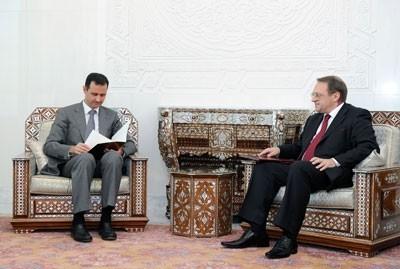 During United Nations discussions about imposing sanctions on Syria, both Russia and China, two important countries on the U.N. Security Council, refused to show up to discuss the issue, the Global Post reported.

Ever since mid-March of this year, Syrian protestors have been in full swing against their president, Bashar al-Assad. The protests in Syria are characterized as part of the Arab Spring, a wave of protests taking place in the Arab world.

Since the beginning of the protests, thousands have been detained and killed by the Assad regime. According to Amnesty International, 12,000 to 15,000 Syrian protestors are currently being detained by the Syrian government. While in detention, many of these prisoners are tortured, and as time passes the abuse appears to be getting worse. In addition to this figure, Amnesty has reports of at least 1,800 protestors that have been killed.

One example of this violence is seen in the attack on political cartoonist Ali Ferzat. According to the Global Post, Ferzat was dragged from his vehicle and had both of his hands broken so he would be unable to draw. The regime has also locked up other prominent people who were fighting for democracy in order to send a message to discourage any more protests.

Due to the number of civilian casualties related to this revolution, the U.N. has stepped in to impose sanctions that will remove al-Assad from power. Although some U.N. members have been reluctant to follow through with the proposal, Russia and China have been the biggest opponents to the initiative, Reuters reports. Both countries have trading ties with Syria, and all three countries share relatively similar political systems based on a central authority rather than democracy.

Dean Cheng, a research fellow at the Asian Studies Center for the Heritage Foundation, agrees that this fear may be a factor in China’s opposition. In an interview with The Diplomat, Cheng said that the Chinese are fearful that the rebellious ideals of the Arab Spring could spread toward their country. According to Cheng, China would rather prevent the rebellion than aid it further, and the Chinese are more concerned with its political contracts being honored than with the human rights abuses of the current government.

For its part, Russia has expressed belief that al-Assad should be given the opportunity to implement reforms before the U.N. begins taking action.

It seems unlikely that Russia and China will budge on their positions, based on reports from a meeting held on Sept. 1 between Mikhail Bogdanov, deputy foreign minister of foreign affairs of the Russian Federation, and Li Hui, the ambassador of the People’s Republic of China to Moscow. According to Syrian Arab News Agency, Bogdanov and Hui both stated that Russia and China are adamant about having no part of the external interference that the U.N. has proposed in Syria.

According to Duncan, Syria is not a country that is rich with oil like Libya or Saudi Arabia. Due to oil abundance in the latter countries, the government has leverage to keep their population under control. On the other hand, countries like Syria that have fewer natural resources are more susceptible to uprisings. Therefore, to keep control, the Syrian government has been trying to use authoritative violence and intimidation to increase stability and maintain control of the country. The rebels and protestors are the ones who are disrupting this control, Duncan explained.

“The rebels represent democracy: people fighting for the right to be free,” Duncan said.