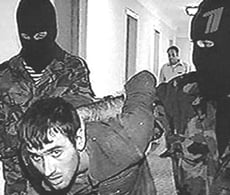 Around 9:30 a.m. local time Sept. 1, approximately 30 armed attackers, including six identified as Chechen, took a secondary school in Beslan, Russia hostage. Over 1,000 teachers, students and parents, were held for almost 53 hours in the school without food or water, according to The Moscow Times. So far, 340 people are known dead, and 540 have been reported wounded. About 200 are still missing. The attackers arrived at the school in a hijacked police truck. According to statements from the hostages, they retrieved weapons that were hidden under floorboards during summer renovations. The Information Telegraph Agency of Russia reported that at least nine parents were wounded in the initial attack. After that gunfire subsided, however, at least 15 children were able to escape. “I saw three people running in there with sub-machine guns,” student Zaurbeck Tsumaratov told reporters from RTR Russian TV after escaping from the school. “At first I simply thought it was a joke. Then they began to fire in the air, and we ran away.” The attackers lined the remaining children up against the windows of the gym to thwart rescue efforts. Russian Interior Minister Kazbeck Dzantiyev said that the rebels demanded that Russia withdraw its troops from Chechnya. “They have said that for every fighter killed, they would kill 50 children, and for every fighter wounded, 20,” he said, Reuters reports. On Sept. 3, the third day of the siege, a heavy bomb exploded after falling off a basketball hoop inside the gym. The explosion sparked an intense battle between the attackers and the Russian police, members of the FSB special forces, and armed civilians who surrounded the school. After the explosion, hostages streamed out of the gym, as the attackers frantically fired at them. The battle could have ended without incident, had the civilians stopped firing, said former president of the Republic of Ingushetia Ruslan Aushev, who tried to negotiate the release of the hostages. Aushev, who was communicating with the attackers by phone, said they had promised to stop firing if those outside would as well. Instead the attackers detonated their explosives, and tried to escape as the gym roof collapsed. Several were able to flee unnoticed while crowd members lynched one attacker, and pulled another from a police car, tearing him to pieces. At the same time, medics collected the dead who had been lying outside the school since the crisis began. According to the Associated Press, special forces were wholly unprepared, to the point of being forced to borrow ammunition from civilians. Ten members of the Alpha and Vympel elite special forces units were killed, and 26 were wounded. A spokesman for the Vympel veterans public organization said that so many officers had not been killed since the units’ creation. Authorities at the Beslan hospital noted some officers were shot in the back by overzealous civilians. Russian President Vladimir Putin, who had opposed a Parliamentary probe into the Beslan attack, now supports an investigation, despite public concern it won’t be objective. Putin delivered an address to his nation Sept. 4. “We demonstrated our weakness, and the weak are beaten,” he said. Putin also spoke about the need for public mobilization against separatist movements in Russia. “This is a challenge to all of Russia, to all our people,” Putin said. “This is an attack against all of us.