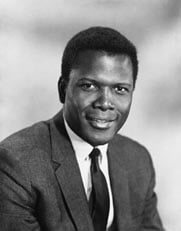 Legendary actor Sidney Poitier will give a lecture at Guilford College on Dec. 2 at 7:00 PM in Dana Auditorium. The Academy Award-winning actor, director, producer, and star of such classic Hollywood films as Guess Who’s Coming To Dinner and In The Heat Of The Night will be the fourth in this year’s Bryan Series, giving a lecture entitled “The Oneness Of The Human Family.”Poitier was born in Miami, Florida, on February 20, 1927 and grew up in the British West Indies. An African American, he is said to be to Hollywood what Jackie Robinson was to baseball. He overcame the racial barriers of the film industry to achieve superstar status, become a Hollywood favorite, and become the first African American to win an Oscar. Dropping out of school at the age of 13, he eventually joined the army and served as a medic in World War II. After his time in the war, he moved to New York City and auditioned for the American Negro Theater. At first unsuccessful, he auditioned again six months later and was then accepted. He Continued from page 1made his Hollywood debut in the 1950 film No Way Out. From then on, Poitier consistently performed in critically acclaimed and racially charged films. His power in the cinema made him a figure in the African American civil rights movement, which was in full swing early in his career. The 1963 film The Lilies of the Field made him a Hollywood superstar and earned him an Oscar for Best Lead Actor. He was the first African American to do so. He continues to win awards from prestigious film organizations for his lifetime of achievement. Poitier used his acting skills as a means of social activism. Consistently playing in controversial films, he has delivered larger-than-life performances as a proud and intelligent African American who can stand strong and maintain dignity despite being a target of racism. Poitier does so in In the Heat of the Night which will be shown Nov. 19 at 7:30 p.m. in Bryan Jr. Auditorium. Poitier’s visit to Guilford College ranks as one of the most anticipated events for students and faculty alike. “He is a very powerful actor,” said first-year Matt Steere. “Whatever he speaks of is going to be powerful.” Though not the tireless film star he has been, Sidney Poitier continues to stand as a figure and landmark in American Cinema. He is an American legend in the truest sense of the word.