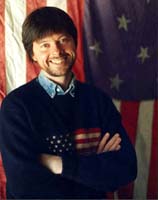 Ken Burns, the director of such documentaries as Jazz, Baseball, and Civil War will be on campus Thursday, Nov. 6, for a lecture entitled “The American Trilogy” at 8:00 p.m. Burns is the third artist in Guilford’s Bryan Series called “Arts and the Human Experience.” Previous artists have included Dr. Sherwin Nuland and Edward Albee. Burns began directing his own films in 1981. His first release, Brooklyn Bridge, was nominated for an academy award in 1982. He has since gone on to direct at least sixteen more documentaries, ranging from The Congress to Mark Twain. Episode Five of Jazz was shown Oct. 6 and “Inning Six” of Baseball was featured Oct. 24 in Bryan Jr. Auditorium. Baseball is an 18.5-hour marathon on the history of baseball from its mythical beginnings to today’s multi-billon dollar business. Political Science professor Kyle Dell selected “Inning Six (1940-1950)” of Baseball for many reasons, the most important being Jackie Robinson breaking into the majors in 1947. Dell also believes 1941 was the greatest year in baseball history because of Joe DiMaggio’s 56-game hitting streak and because Ted Williams hit .406, becoming the last man to hit 400. Each “inning” is approximately two hours long and is narrated by 90-plus guests. The guests include past ballplayers, actors, sportswriters, poets, professors, and radio announcers. “Baseball is a history of ourselves, it provides a narrative,” said Dell. Dell wasn’t a baseball fan until about 10 years ago when he and his wife moved to Boston and he fell in love with Fenway Park and the Red Sox. “There were many nights I would be up past midnight hoping the Sox would reverse the curse. I spent a lot of money I didn’t have watching them in Fenway eating hot dogs and hoping.” Sidney Poitier will be the final artist to grace Guilford’s campus on December 2. Showings of Poitier’s work include A Raisin In the Sun (Nov. 13, 7:30), In The Heat Of The Night (Nov. 19, 7:30), and Guess Who’s Coming to Dinner (Nov. 24, 7:30), followed by a lecture, Oneness of the Human Family Dec. 2 at 7:00 p.m. All lectures are in Dana Auditorium and all films are shown in Bryan Jr. Auditorium.